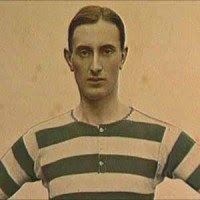 Full back Donald Bell was on the books at Newcastle United as an amateur in 1910-11 but didn't make a first team appearance.
In 1913 he made his League debut for Bradford Park Avenue. He made 5 appearances for the club.
In 1916 2nd Lt. Bell was awarded the Victoria Cross. He was killed in action 5 days later.

London Gazette Notice of Death 9th September 1916: Temp. 2nd Lt. Donald Simpson Bell, late York. R. For most conspicuous bravery. During an attack a very heavy enfilade fire was opened on the attacking company by a hostile -machine gun. 2nd Lt. Bell immediately, and on his own initiative, crept up a communication trench and then, followed by Corpl. Colwill and Pte. Batey, rushed across the open under very heavy fire and attacked the machine gun,, shooting the firer with his revolver, and ‘destroying gun and personnel with bombs. This very brave act saved many lives and -ensured the success of the attack. Five days later this gallant officer lost his life performing a very similar act of bravery.