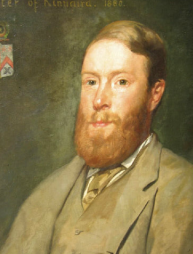 The Hon. Arthur Fitzgerald Kinnaird (Lord Kinnaird from 1887) has a distinguished FA Cup record.
He appeared in 9 finals (he played for Wanderers and Old Etonians), was on the winning side 3 times, playing as a forward, halfback,  back and goalkeeper. He scored twice in Finals.
He also has the distinction of being the first player to score an own goal in a final.
The incident occurred in the 15th minute or thereabouts of the  Wanderers versus Oxford University Cup Final of 1877.
Some contemporary accounts ( I've read the ones in the London Evening Standard, and Sheffield Independent)  credit the goal to Waddington.

There is plenty of evidence for the own goal:
...a long kick by Waddington drove the ball sharply into the centre of the posts and Kinnaird inadvertently stepped back between the posts with the ball in his hands. An immediate appeal was made to the umpires and after some consultation the verdict was given in favour of Oxford- a decision that seemed to be quite correct and fully confirmed by the spectators in the immediate vicinity of the wanderers goal.
Oxford University Herald 31.03.77

Waddington made a splendid kick clear from the centre of the ground, and Kinnaird misjudging it, to the amazement of the spectators, falling back into his goal, the umpires, after a lengthy consultation, properly awarding a goal to Oxford.
Nottinghamshire Guardian 30.03.77

An oft repeated addendum to this story is that Kinnaird later used his influence to have this goal expunged from the records until it was reinstated 'some 50 years after Kinnaird's death'.
If that was the case football history books, annuals, newspaper reports etc from the first 70 odd years of the 20th century would show the score as being 2-0 in favour of Wanderers,
Try as I might I have not been able to find any evidence of the score being recorded as 2-0.