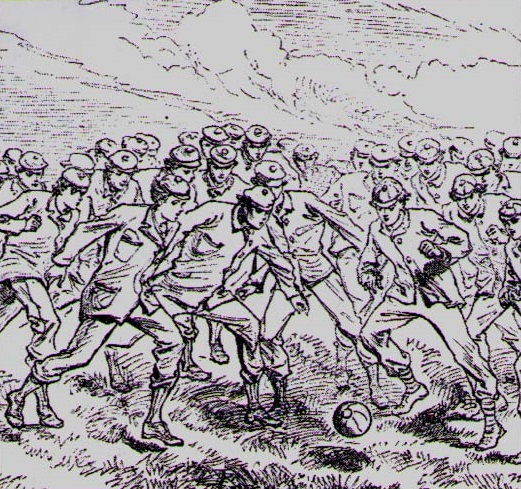 The pre-history of Association football in Germany is very complex. The picture is complicated by 2 factors. Firstly the misleading formation dates of clubs which, though now practitioners of Association football, were in existence for decades before they took to the sport. Secondly the persistence of Rugby and other hybrid forms of  rules.
Even the followers of Konrad Koch did not abandon handling and carrying the ball until the 1880s.
There was also a certain ideological opposition to football as being a very un Germanic pastime. Gymnastics and fencing were the focus of most organized sports clubs. 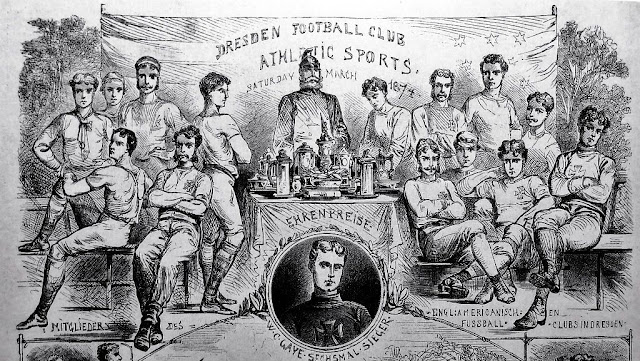 Dresden  Football Club (often referred to as Dresden English Football Club) consisting of British and American expats, were playing a form of football in 1874. The contemporary press reports refer to the ball being 'propelled forwards by the foot' and, given the novelty of the spectacle, one would assume that if anything akin to Rugby had been played, the reporter would have mentioned the chaos and hurly burly of that game . The games appear to have been played amongst club members in the city's Große Garten.
The first competitive game featuring Dresden Football Club against another club  was not until 1891, when English F.C. (Berlin) were the opponents.
By this time the first competitive inter club Association football match in Germany had been played:  In 1888  Heidelberg College beat English Football Club Freiburg 2-1. The Freiburg team originated in an English style military academy in the town.
Another cradle of German football was Braunschweig. It was here that August Hermann and Konrad Koch promoted ballgames in an echo of English muscular christianity. They appear to have had strong Rugby inclinations. Here is a link to an interesting history of the development of German football from the Braunschweig. The text is in German: