May 27th , 1934,Centenario Stadium, Nacional v Peñarol in the league championship play off . 21 minutes into the second half. The score is 0-0.  Bahía, Peñarol's Brazilian winger, shoots at goal, (at the Colombes end of the ground if you're a stickler for detail).
Eduardo García in the Nacional goal is beaten but the ball passes his right hand upright.
The ball then strikes a case belonging to the Nacional physio, and bounces back into play.
Anselmo passes to Braulio Castro who rolls the ball into the net. Referee Telésforo Rodríguez  signals a goal.
Nacional's Juan Miguel Labraga and José Nasazzi protest vigorously- to the point of assaulting the referee. After the furore abates Snr.Rodríguez required medical tresatment- he is replaced by Luis Scandroglio. Nasazzi,Labraga and Chifflet are dismissed. Darkness falls and the match is suspended.
64 days later(!) the League passed judgement.Castro's goal was expunged. The match was to be resumed as 0-0 after 70 minutes, but Nasazzi and Labraga remained sent off. Chifflet was reprieved.
So, on 25.08.34 the remaining 20 minutes was  played behind closed doors at the Centenario. The 9 of Nacional held on for a 0-0 draw , even though 2 half hour periods of extra time were also played.

September 2nd's replay saw a further 150 goalless minutes between the 2 sides (11 against 11 this time).
The matter wasn't decided until November 18th- Centenario was again the venue.
Braulio Castro put Peñarol ahead in the 42nd minute, Hector Castro equalising 8 minutes after the break. 5 minutes later Arremon restored Peñarol's lead but in less than 20 minutes Hector Castro completed his hattrick to seal the championship for Nacional 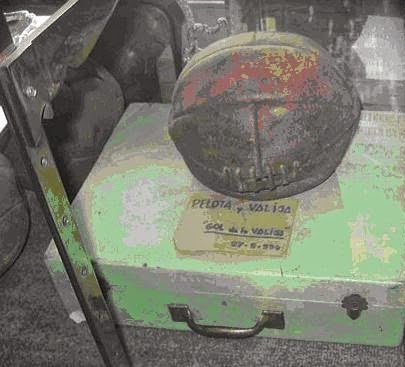 The ball and the bag.