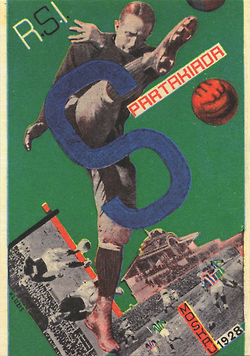 For the unity of workers-sportsmen of all countries...


Moscow, 1928. The new Dinamo stadium opens and the first Spartakiad is held. A Spartakiad was a multi sports competition along the same lines as the Olympics, but aimed at promoting the cause of proletarian internationalism. The motto of the  Spartakiad was For the unity of worker-sportsmen of all countries. Worker's organizations from non - socialist countries joined in alongside representatives from Soviet Republics.
The 1928 Moscow Spartakiad included a football tournament. This was an attractive proposition for the sporting public, the USSR's diplomatic isolation meant that they were largely unfamiliar with the football of other lands,
Initially the 21 teams (which included representatives from Uruguay, Spain and  Switzerland) were to be divided into 3 leagues. However, on the suggestion of the Georgian SSR  the tournament was re-devised. This was prompted by some controversy.  The Uruguayans, amateurs rather than the world conquering Celeste of the Golden Decade, were denied 2 goals by a Soviet referee in a violent game with Ukraine. Ukraine won 3-2 and Uruguay appealed against the conduct of the match.
The new tournament had 2 groups, group one consisting of 12 teams from the  RSFSR and group two for other Soviet republics and foreign teams. A play off match would then decide the overall championship.
The RSFSR final saw Moscow beat Leningrad 5-3 (thus becoming RSFSR champions for 1928).
The Ukrainian SSR beat Uruguay 4-0 in the Soviet Republics/ other nations final.
In the final play off Moscow beat the Ukrainian SSR 1-0.
This is the line up of the victorious Moscow team, parent clubs listed where known:  Mikhail Leonov, Michael Ruschinsky (Trekhgorka) , Alexander Starostin (Pitscheviki) , Sergei Egorov, Theodore Selin (Dinamo Moscow)  , Stanislav Leuto (Pitscheviki) , Nikolai Starostin (Pitscheviki) , Nikolai Troitsky, Peter Isakov (Krasnaya Presnya)  , Vladimir Blinkov (RKimA),  Alexander Choline ; coach - Mikhail Kozlov .