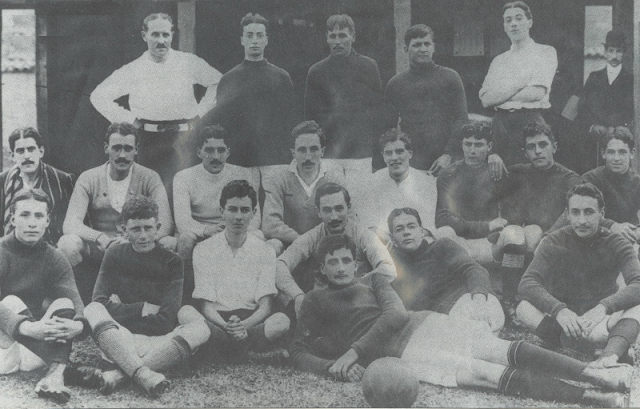 Colombia did not enter into international football until 1938, so we do not cover any of their exploits on these pages.
The development of the domestic game, however, is a point of interest.
The traditional establishment story was a familiar one- with football matches played by English engineers building the railway from Barranquilla to Puerto Salgar (on the country's Atlantic coast) in the first few years of the 20th century. The game developed in this area - but contrary to popular belief it seems that Barranquilla was not the cradle of Colombian football.

The first football in Colombia was actually played in the capital, Bogotá. In 1880 an American, Colonel Henry R Lemly, was seconded to the  National Military School in Bogota. He had been drawn to football and it's salutary qualities when travelling in Europe. In 1887 (on returning from a trip to Britain) he introduced association football at the Military School, following the model of the English public schools in using sport as a means of developing both the character and the health of students.

One of the most popular games established in foreign schools, is the one the English call football, which  arrived in our country some time ago. This game is hygienic because it gives force, agility and it strengthens the body. The gentleman Colonel Lemly has established it in the Military School...
El Telegrama (1892 -the paper also published a translation of the Laws of the Game).

Federación Colombiana de Fútbol was founded in 1924 and became affiliated to  FIFA in 1936.