Soccer Champs Will Not Tour Sweden
The Bethlehem Steel Company decided today that it would not take the chance of sending its champion soccer team across the ocean to Norway and Sweden in these war time [sic] to play a series of games with elevens in those countries. Therefore, the Sweden Football Association was cabled that its invitation would not be accepted, although that organization had posted $4000 in this country to defray expenses.
Philadelphia Inquirer  11.6.16 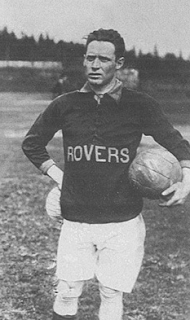 Tommy Swords
In 1916 the Swedish Football Association invited the United States Football Association to send a team to play a series of matches in Norway and Sweden. When the owners of the strongest club side of the day, Bethlehem Steel, declined the invitation, the USFA instead  assembled a representative team from the Northeastern states.
The squad, named All-American Soccer Football Club, was managed by Thomas Cahill, secretary of the USFA. Mr Cahill had visited Sweden during the 1912 Olympics to campaign for the USA's inclusion in FIFA . The coach was Harry  Davenport of Newark, New Jersey. All-Americans were  captained by Tommy Swords of the Fall River Rovers, who was elected democratically by the other players on the outward voyage.
Although at this time the USA was a neutral in the War, transatlantic voyages were a hazardous undertaking due to the actions of German U-boats. 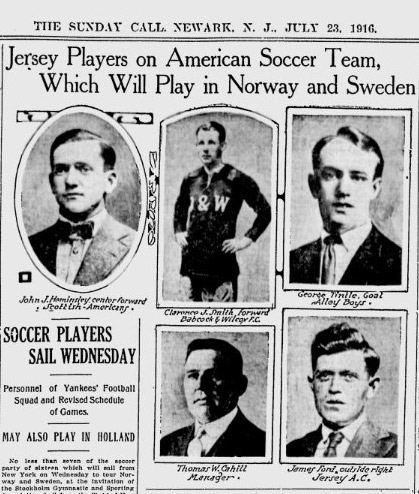 The Americans opened their tour on August 15th 1916 against Stockholm Tigarna . The 1-1 draw attracted a crowd of 20,000.
On August 17th The All Americans took on Sweden in what is recognized as being the USA's first full international, and the first ever intercontinental international.  Accounts of the attendance at the Olympic Stadium range from 16,000 to 21,000 according to various sources.
The USA lined up as follows:

Sweden took the lead in the 7th minute but the USA then took a 3-1 lead with goals by Swords, Ellis and Cooper. They resisted late pressure to hold on for a 3-2 victory.

On August 24th the tourists were defeated 3-0 in Stockholm by a combined team of AIK Stockholm/Djurgårdens IF.  This was followed three days later by a 2-1 win over Örgryte IS in Gothenburg.  Örgryte were expected to avenge the defeat of the national team, and following the All Americans' win there were scenes of disorder, with several USA players being assaulted by local supporters.

The All Americans then  traveled to Oslo (which was then known as Kristiania) for a match against the Norwegian national team. It was Norway's 20th international, and they had yet to register a victory. A crowd of 12,000 were present on September 3rd. The USA were reduced to 10 men before half time (through an injury to Diederichsen), and finished the game with 9 players.  The tourists were able to secure a 1-1 draw thanks to a 75th minute goal by Ellis.
The USA line up was:


The All Americans  returned to Stockholm for a rematch with the AIK Stockholm/Djurgårdens IF combined team . This resulted in a 2-1 win for the tourists.
Charles Ellis and Harry Davenport stayed on in Sweden to take up coaching positions in Stockholm. 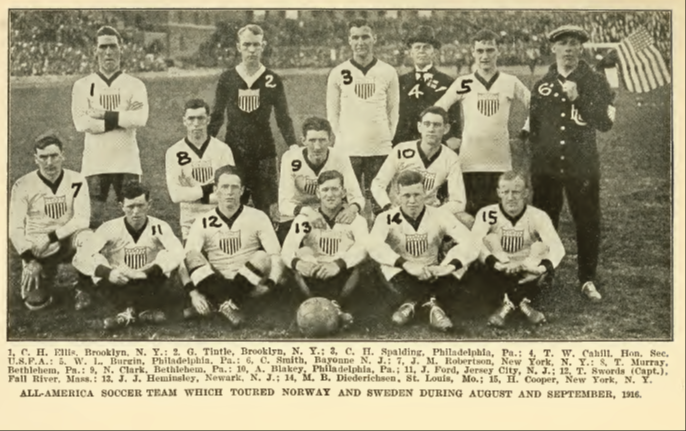