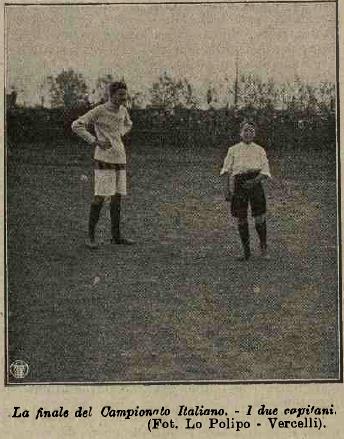 A remarkable photograph.
Internazionale claimed their first championship title on 24-04-1910. They did so with a 10-3 victory over a Pro Vercelli reserve team made up of youths reportedly aged 11-15. The 2 had finished level on points at the end of the league programme. F.I.G.C.had refused to reschedule the play off, which clashed with Pro Vercelli's prior arrangement to play in a tournament. Pro Vercelli's response was to field the youth side, who reportedly indulged in some dirty play.
In the regular season Pro Vercelli had beaten Inter 4-1 in Milan, whilst Inter had won the return 2-1.