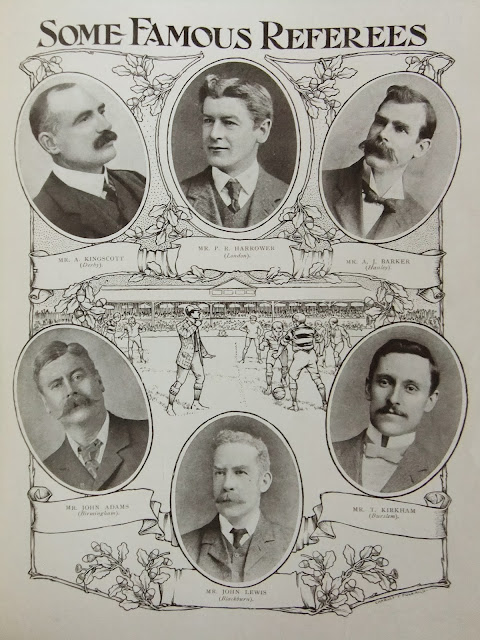 In the earliest years of the Football Association referees and umpires were drawn from the ranks of current players. Charles Alcock, for example umpired in international matches before participating as a player. In the 1880s Major Marindin bestrode the world of refereeing like a colossus.  As football's mass appeal burgeoned  the referees themselves became celebrities. As the illustration above shows the favoured uniform was tweed plus fours and a deerstalker.


Arthur Kingscott
From Long Eaton, Mr Kingscott refereed in 3 FA Cup Final matches (1900 and 1901, including the replay). He officiated for 14 seasons in the Football League. There was controversy when he made a call on a goal line incident resulting in a Sheffield United goal when he was distant from the action.

Patrick Harrower
Mr Harrower took charge of the 1905 FA Cup Final. He was a Scottish Rugby Union internationalist. He refereed international matches on the continent.

A. J Barker
Hanley's Mr Barker refereed the 1904 FA Cup Final.
On the opening day of the 1906 season Mr Barker (whose moustache is worthy of note) oversaw a game between Manchester City and Woolwich Arsenal in which 5 City players left the pitch due to the effects of the 32C temperature.

Tom Kirkham
Mr Kirkham officiated in 3 internationals and the 1902 FA Cup Final (including the replay). This is the referee pursued by William Foulke in the legendary story.