After the demise of the Combination the clubs who were not yet members of the exclusive Football League continued to look for a means of ensuring their survival. So the Football Alliance came into being. The Football Alliance owed it's relative success to the close resemblance it bore to the Football League. As we have seen, the Combination faltered because it did not go to the lengths that the League did to ensure fixity of fixtures.Those running the Alliance had learned from both the failure of the Combination and from the success of the League. 12 members meant a manageable season of home and away fixtures (just like the League). The catchment area was wider than that of the League, but the clubs were all from the midlands and the north.
10 of the 12 clubs involved in the first season of the Alliance had played in the Combination the previous year.
Final table- 1889-90:

A traffic developed between the Alliance and the League. During it's 3 year existence the Alliance was a de facto second division of the League.
At the end of the 1888-89 season the bottom 4 clubs in the Football League had all applied successfully for re election  (Burnley, Derby County, Notts County and Stoke) and no new clubs were admitted.
In 1889-90 when Stoke finished bottom of the  Football League they moved into the Alliance, when they won the Alliance in 1890-91 they were rewarded with 'promotion' back to The Football League.
Final Table 1890-91- the previous season's top  2 occupied the bottom 2 places: 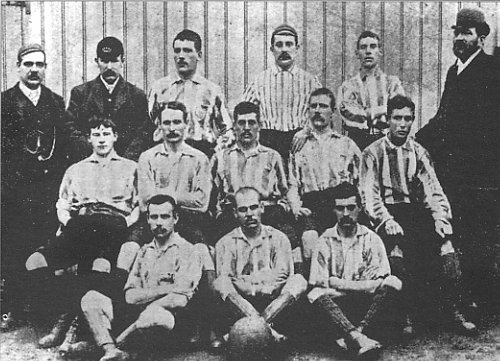 When, in preparation for the 1892–93 season the Football League was expanded to 2 divisions there was an almost blanket movement of clubs from the Alliance: