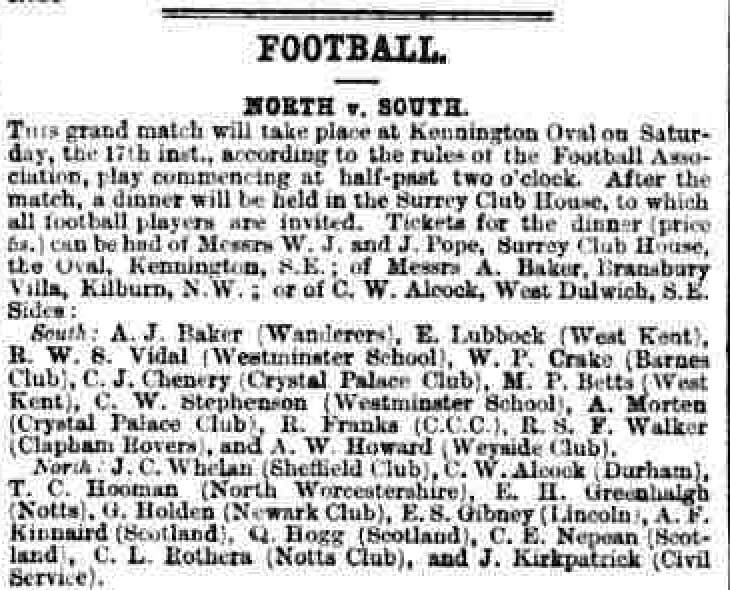 Charles Alcock was always keen to promote the image of the Football Association as being a national body under which the various codes of the game would come together. The truth of the matter was that even 7 years after the Association's foundation their sphere of influence was only just beginning to spread beyond the metropolitan clubs.
Alcock had promoted the idea of inter county matches and in 1870 had started the 'International' series between teams representing England and Scotland (again, featuring almost exclusively London based players on both sides).
In December 1870 Alcock hit on the novel idea of a North vs South match to further the notion of the Association has having nationwide influence.
Most clubs in the north and midlands tended to follow either the Sheffield Rules or local variations. It was only in 1870 that the then leading midlands clubs had  agreed to play exclusively by the rules of the Association.
A list of FA member clubs from 1870 shows the following clubs form the north and midlands:
Bramham College York.
Chesterfield
Donington Grammar School (Lincolnshire)
Garrick (Sheffield)
Hull College
Leamington College
Lincoln
Newark
Nottingham (Notts County)
Sheffield

The North therefore were bolstered by a number of metropolitan players (Alcock included) on the basis of their northern birthplaces. North of London seems to have been far north enough, though in the case of 'Scotland's' Quintin Hogg London itself counted as the north.
The Sheffield and Rotherham Independent (20.12.70) reported that: the rules were those of the of the Football Association, and the principle of 'no hands' was strictly maintained, although there was an amount of arm work visible throughout the game, which we hope to see reduced, if not entirely abolished , on future occasions.
Press reports of the game itself were very positive, describing the game as being the best contest seen for some time, with the teams as evenly matched and ceaseless in their efforts. This despite the fact that the heavy ground and  slippery conditions rendered dribbling impossible. The play was described as being superior to that seen in the recent England v Scotland match.
The South won 1-0 thanks to an 87th minute goal from Crake, shooting from a Howard cross following a 'rush' by the South's forwards. Reports mention the South's familiarity with each other's play as being the factor that separated the 2 elevens.