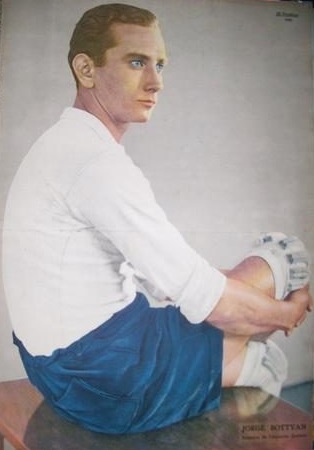 I haven't been able to find out a great deal about Jorge (sometimes given as Luis) Bottyan. He appears on lists of Hungarian players who played in Argentina. I don't know how he came to live and play in Argentina, and I don't know if he had a career in Hungary.
Bottyan played for Club Atlético Chacarita Juniors, the Buenos Aires club founded by Anarchists on 1st  May 1906 and known as Los Funebreros (The Undertakers). He was with them between 1934 and 1938.
I love the way in which footballers, and more specifically goalkeepers, were portrayed in the Argentine media of the 1920s and 30s. They seem to exude an heroic, casual calm.  In this picture  Bottyan has an aristocratic air of insouciance. Despite the knee pads. 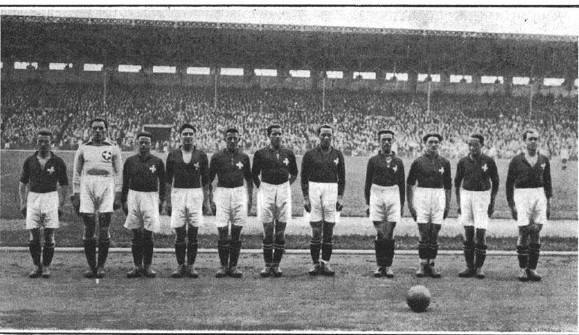 The 1924 Olympics in Paris marked a high point in the history of Swiss Football.
In 19 years of international football the Swiss had played 53 matches, recording 15 wins, 9 draws and 29 defeats.
At the tournament they began by smashing Lithuania 9-0. Paul Sturzenegger (FC Zurich) scored 4 and  Max 'Xam' Abegglen (Grasshopper) 3.
In the next round they drew 1-1 with Czechoslovakia, winning the replay 1-0.
The following match saw Sturzenegger and Abegglen score as Vittorio Pozzo's Italy were beaten 2-1.
Abegglen added another 2 goals to his tally as Switzerland beat Sweden 2-1. This game took place on the 5th June, which was also the expiry date for the Swiss party's rail tickets! They considered withdrawing in order to avoid incurring additional costs but a newspaper appeal raised the funds needed to prolong their stay in Paris.  This victory over the Swedes, the surprise package of the games, set up a final against Uruguay.
The Swiss were easily beaten 3-0 in front of a crowd of 60,000. Abegglen finished top scorer with 6 goals (second only to Petrone, on 8) and Sturzenegger scored 5. Xam Abegglen scored 34 goals in 68 appearances for Switzerland , a record that was unequaled until 2001. 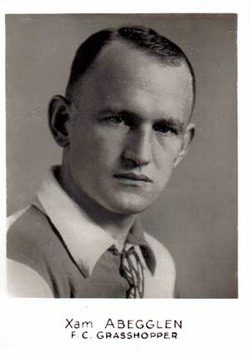 The Swiss national team was run by a three man committee known as  the Technical Commission. Each area of the country was represented by a coach. The Swiss favoured this arrangement up until the 1934 World Cup. In this case the trio was Jimmy Hogan (England-Young Boys), Dori Kürschner (Hungary- Grasshopper) and Teddy Duckworth (England- Servette). Hogan, of course, was one of the most influential figures in the development of continental football. Kürschner  had enjoyed success in Hungary, Germany and with Grasshopper- but it was his influence on Brazilian coaching and tactics that later made his name. The triumvirate was headed by Teddy Duckworth.
Duckworth was the man who actually took the team to Paris, and it was he who was awarded a silver medal.
Duckworth (whose first names were Thomas Crook- Teddy being a nickname) was born in Blackpool, Lancashire. He made his debut for Blackpool FC in 1902. He played at outside right.
He played 9 games in the 1902-03 season before moving to West Ham United of the Southern League. He then joined First Division Blackburn Rovers. His only 1st team appearance in 2 seasons at Rovers came on 1st October 1904, a 1-0 defeat at home to The Wednesday. Duckworth  rejoined Blackpool in 1905-06, making a further 21 appearances for the club.
Duckworth's coaching career appears to have begun in 1919 when he joined Servette. Under his leadership
Servette won Swiss Série A in 1922,1925, 1926 and 1930. They won the Swiss Cup in 1928.
Duckworth led the Switzerland selection to the Olympics in 1928, but they went out in the first round, beaten 4-0 by Germany. 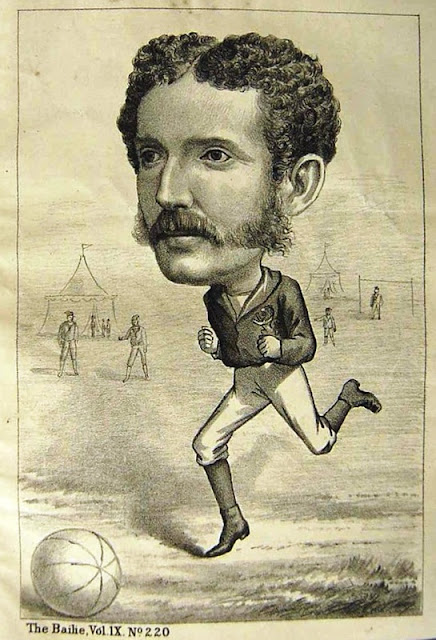 Whereas Scotland were quite slow to take to international football, the opposite could so easily have been true. Scotland would have been trailblazers on the international scene had it not been for the early death of William Dick.
When Dick passed away in 1880 he was in the process of organizing a Scottish FA tour of Canada. The tour never took place.  Dick was only 29 when he died. He had been the Secretary of the Scottish FA for 5 years. He had also founded the Scottish Football Annual in 1875.
Dick officiated as referee in 2 international matches- both of which resulted in wins for Scotland, 2-0 over Wales at Wrexham on 05.03.1877 and a 7-2 win over England at 1st Hampden on 02.03.1878.


These days, of course, International football is the centre of  a multi million euro industry that involves sponsorship, media rights, endorsements...
It might be refreshing to look back at the earlier days, when the amateur ethic prevailed and there was an altogether more relaxed attitude to the arrangement and completion of fixtures.
Let's look at one of the oldest continental football rivalries, Belgium against France.

The second meeting between the 2 countries took place on 7th May 1905  at Vivier d'Oie, Brussels  An attendance figure of 300 is recorded.

The first incident of note occurred when France objected to the inclusion of Eric Thornton in the Belgian side. 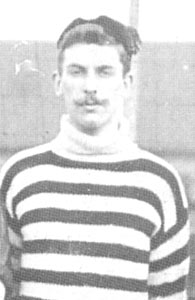 Goalkeeper Thornton was British. He studied in Belgium and had represented Brussels University in the 1900 Olympic Games. Thornton played his club football with Leopold Club de Bruxelles. He had played an international for Belgium against Netherlands.  The French, however, were not happy at Belgium  having an Englishman in their line up and their protest delayed the kick off by an hour.
Robert Hustin of Racing Club de Bruxelles was sent for to replace Thornton and so the match could begin...


Except that Belgium only had ten players...
Gustave Vanderstappen (Union St.-Gilloise) arrived at the ground late despite the hour delay.

But Belgium could begin with ten men, so the game could kick off...
Except that there was no referee...
Mr John Lewis, the highly respected English referee was travelling to Brussels to officiate in the match. Mr Lewis was an ardent traveler who clocked up thousands of miles in order to referee matches, always refusing to claim his expenses.  Mr Lewis had arrived in Brussels routinely. However, the coach taking him to the ground had got lost. Very lost...
Fortunately Rodolphe Seeldrayers was on hand. Herr Seeldrayers was a German, but his role in the development of Belgian sport is inestimable. He was a founder member of the Royal Belgian Union of the Football Association Societies. Later he served  as president of FIFA. The French had no qualms about him stepping into the breech.
Fifteen minutes of football, no goals , but the arrival , firstly of Vanderstappen to make his country's number up to XI, and then of Mr Lewis (suitably agitated I'm sure).
The 15 minutes played were allowed to stand. Mr Lewis relieved Herr Seeldrayers of the refereeing duties. 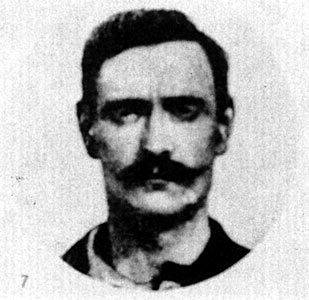 Belgium were winning 4-0 when in the 65th minute the French reaped something of a reward for their earlier protest. Their own goalkeeper, Georges Crozier (Union Sportive Parisienne), was on military service. He had to leave in order to catch a train to get back to his barracks on time. Team Captain Fernand Canelle went in goal for the remainder of the match.
Belgium won the eventful encounter 7-0. 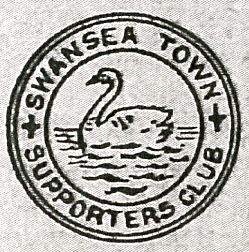 Swansea Town claimed their first trophy during their very first season. The Southern League second division side won the Welsh Cup at the first attempt, overcoming the other major Welsh clubs in the process.
In the preliminary round Swansea beat Milford Town 3-1. In the first round they overcame Mond Nickel Works by 5-0. This set up a derby with Llanelly Town at the Vetch which Swansea won 2-1. Swansea visited the Racecourse in round 3, and beat Wrexham, then of the Birmingham and District League, 3-1.
In the 4th round Swansea were drawn away to Merthyr Town of the Southern League first division. Swansea emerged as 3-0 winners and returned to Penydarren Park for the semi final, beating Cardiff City 4-2.
The final was held at Ninian Park on 19th April 1913. Pontypridd (also of the Southern League second division) were the opponents. A crowd of  9,000 watched a 0-0 draw. The replay was held at Mid Rhondda FC (Tonypandy) on 24th April. Swansea's winner is credited to Greirson in these press cuttings, whereas the Welsh Football Data Archive has Anderson as the scorer.
The Swansea Town line up was :
Fisher, W J Nicholas, A Sutherland, C Duffy, J Hamilton, Jepp, Manser, Anderson, Weir, Grierson, Swarbrick 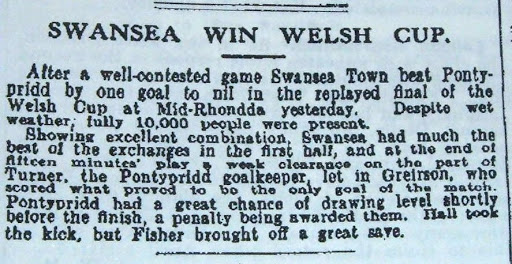 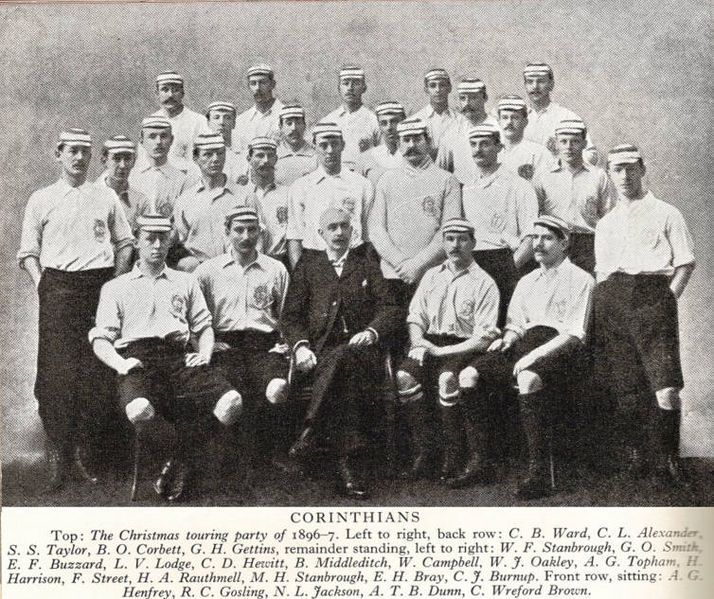 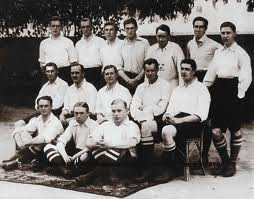