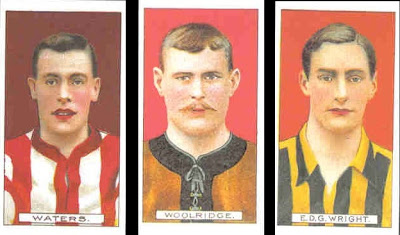 31 Arthur Waters- Stockport County. Close to death in 1905, suffering pneumonia in the season he joined Stockport, left back Waters went on to make 165 first team appearances for the club. County came 13th in Division 2 in 1907-08.

32 Billy Wooldridge -Wolverhampton Wanderers. Wooldridge joined Wolves from Wednesbury Old Athletic in 1900, and scored 90 goals in 356 appearances for the club. He captained Wolves to FA Cup victory in  1908. Dropped back from forward to centre half later in his career. Wanderers finished the 1907-08 season in 9th place in Division 2.

33 Gordon Wright- Hull City. Vicar Gordon Wright was a former Cambridge University and Corinthians winger.  He made 168 appearances for Hull in a 7 year career that ended when he emigrated to South Africa, where he had toured with the FA in 1910. City were 8th in Division 2 in 1907-08. 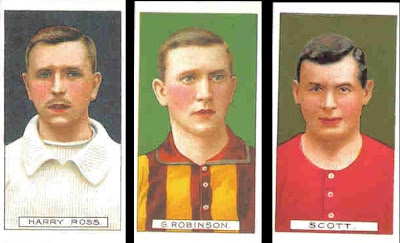 34 Harry Ross- Fulham. Scotsman Ross joined Fulham from Burnley in 1907.
one of those players who can play equally well at right or left back. Physically he is the man for the place. Twenty four years of age, he weighs over thirteen stone and stands a trifle more than five feet ten. He is a vigorous tackler and a powerful kick, and possesses all the attributes of mind and temper that go to make a first class player- The Brechin Advertiser (1905).
1907-08 was Fulham's first season in the Football League, and they made 4th spot in Division 2. 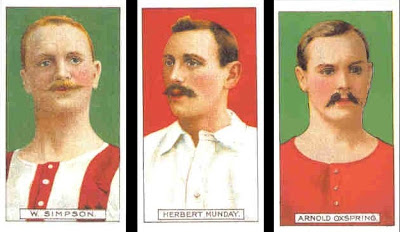 37 William Simpson - Lincoln City. The last of Simpson's 151 appearances for City came in December 1907. In the 1907-08 season Lincoln won just 9 games, finished bottom of the Second Division and were not re elected to the league.

38 Herbert Munday-Chesterfield. The Chesterfield legend made 314 Football League appearances for the club, scoring 107 goals. He represented Sheffield FA against the London FA in 1893.In 1908 he began playing at left-half. Chesterfield finished the 1907-08 season in 19th place in Division 2 and were successfully re elected. 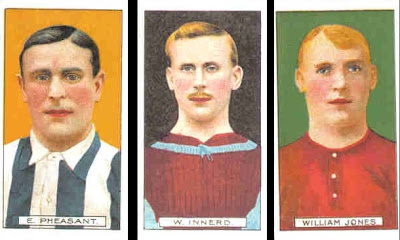 40 Ted Pheasant -West Bromwich Albion.  Pheasant spent 9 seasons at  Wolverhampton Wanderers before joining the Albion for £500 in 1904. He appeared in 152 games for Albion in all competitions, scoring 22 goals. He died in 1910 aged 33, 2 weeks after signing for Leicester Fosse. West Brom were out of sorts in 1907-08, managing only 5th in Division 2.

42 Billy Jones- Swindon Town. Right half Billiy Jones spent most of his career at Bristol City. He was capped once by England (1901) and Joined Swindon from Tottenham in 1907 at the age of 34. Swindon ended the 1907-08 season 5th in the Southern League. 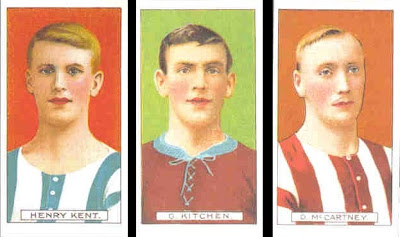 44 George Kitchen -West Ham United. Kitchen joined West Ham from Everton in 1905 and promptly became the first-ever goalkeeper to score on his debut (with a penalty). He was with the Irons for 7 seasons,scoring 6 goals in his 205 appearances. He was also a professional golfer. In the 1907-08 season West Ham finished 10th in the Southern League.

45 David McCartney -Northampton Town. The centre half was captain of the Northampton Town team under the management of Herbert Chapman. This Northampton team was arguably the first English side to employ (through Chapman) modern management techniques and a systematic tactical approach to games. Town were a Southern League club in 1907-08, finishing 8th.


Some nice views here of The Wembley of the North, with it's vast open terraces. In March 1934 a crowd of 84,569 was recorded at Maine Road for a the 6th round of the FA Cup match against Stoke City. 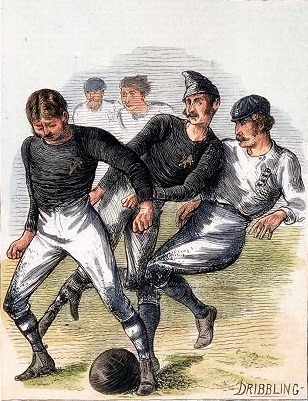 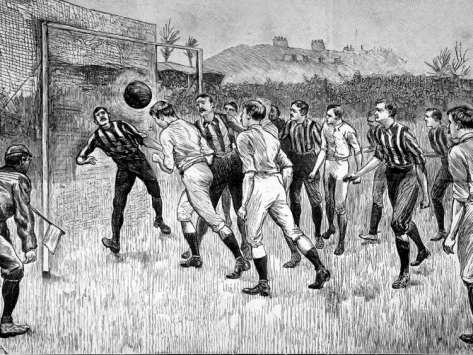 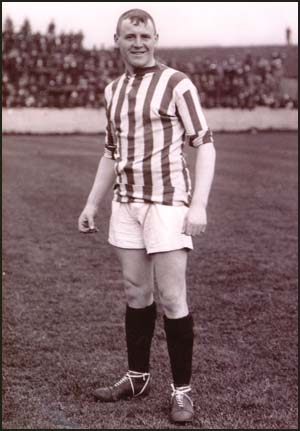 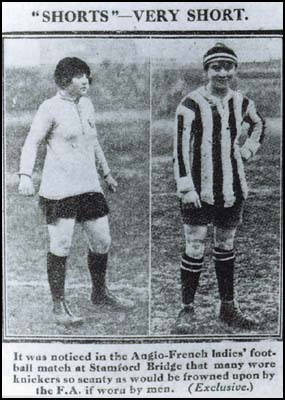 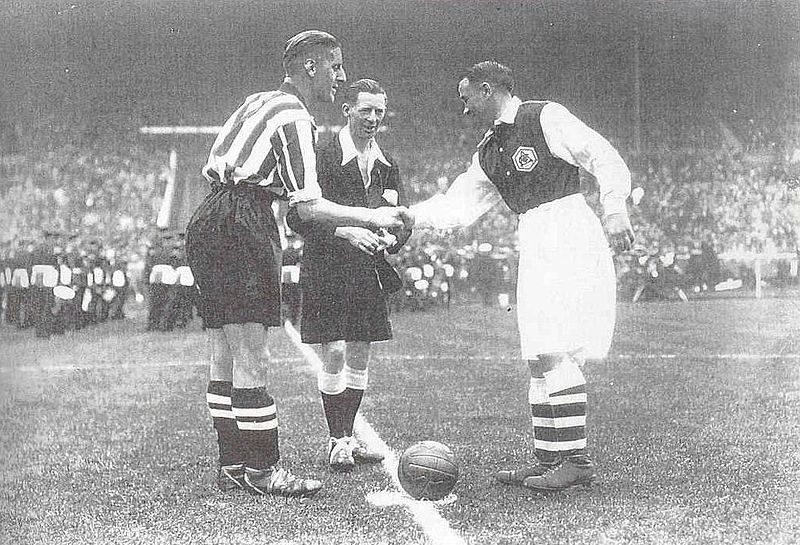 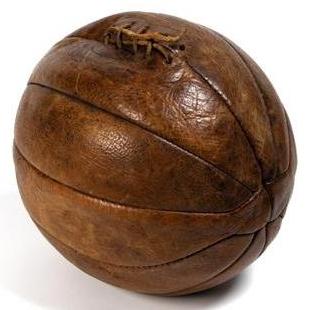 The Football Association was founded with the intention of unifying football rather than formally dividing it into different codes. The hope was that their rules would prove satisfactory to everyone, and that the players of more rough-house variants would abandon their misguided ways and adopt the new laws that were intended to promote skill over brute force and make the scoring of goals a more frequent occurrence.

From the earliest days of the Football Association there had been an emphasis on moving away from the handling game- the earliest comments of both the public and members of the FA reveal this.
Earlier codes of rules (which the Association used as reference points) limited the use of the hands.

The Uppingham Rules (1862):
2- HANDS may be used only to stop a ball and place it on the ground before the feet.
Earlier versions of the Cambridge Rules had:
8- When a player catches the ball directly from the foot, he may kick it as he can without running with it. In no other case may the ball be touched with the hands, except to stop it.
By 1863 the Cambridge Rules were only concerned with the following with regards to handling:
The ball, when in play may be stopped by any part of the body, but it may NOT be held or hit by the hands, arms or shoulders.
The Sheffield Rules (1858) allowed the following:
3. A fair catch is a catch from any player provided the ball has not touched the ground or has not been thrown from touch and is entitled to a free-kick.
7. It is not lawful to take the ball off the ground (except in touch) for any purpose whatever.
8. The ball may be pushed or hit with the hand, but holding the ball except in the case of a free kick is altogether disallowed.

These codes then, were generally prohibitive of the type of handling we associate with Rugby, other than in the case of the fair catch.

Early drafts of the Football Association's 1863 Laws of the game did have provision for more handling than was eventually sanctioned:
Law 9: A player shall be entitled to run with the ball towards his adversaries' goal if he makes a fair catch, or catches the ball on the first bound; but in case of a fair catch, if he makes his mark he shall not run.
It was decided to expunge this draft rule at the fifth meeting of the Football Association (1.12.1863).

The Football Association's 1863 Laws of the game make the following prohibitive references to handling the ball:
Law 9: No player shall run with the ball.
Law 11:A player shall not be allowed to throw the ball or pass it to another with his hands.
Law 12: No player shall be allowed to take the ball from the ground with his hands under any pretence whatever while it is in play.
There is however, the following:
Law 8: If a player makes a fair catch, he shall be entitled to a free kick, providing he claims it by making a mark with his heel at once; and in order to take such kick he may go back as far as he pleases, and no player on the opposite side shall advance beyond his mark until he has kicked.
Which sounds very similar to the 'mark' rule in Rugby Union (which is also used in Australian Football). The player who catches the ball effectively stops play and becomes untouchable until he punts it. Defensively (as in Rugby Union today) this would be a considerable advantage.


A version of Rugby school's football rules (1862), defines the Fair Catch:
3. A Fair Catch is a catch direct from the foot or a knock on from the hand of the opposite side. (Interestingly enough this was the only legitimate way to get the ball in hand- one couldn't simply pick it up off the floor, even if it was in motion).
My comparing the fair catch to Rugby Union rules is, of course, anachronistic. The Fair Catch was removed from the Football Association's Laws in 1866, and the first Rugby Union Football laws were not written until 1871. This set of rules (more specifically rule 28) defines a  Fair Catch in very similar terms to the Football Association's 1863 laws.

Email ThisBlogThis!Share to TwitterShare to FacebookShare to Pinterest
Labels: 1860s, Laws of the Game, Rules, The Football Association 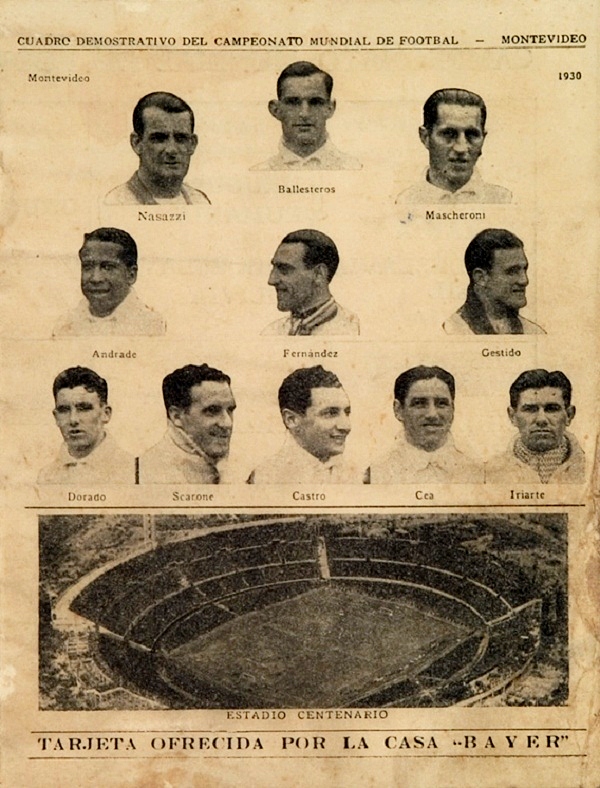 Pro Vercelli and Torino -Tours of Brazil and Argentina 1914 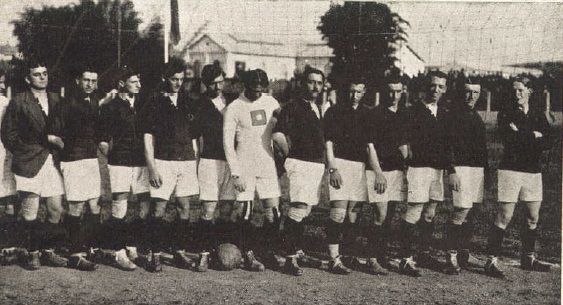 The fact that two clubs from the same corner of Italy (Turin and Vercelli are just 65 km apart) were in South America at the same time has got far more to do with Brazilian rivalry than with Italian neighbourly cooperation.
At the time São Paulo football had two competing governing bodies.
Growth of football popularity amongst the lower classes had generated a rift in the Liga Paulista de Foot-Ball (LPF). The LPF had elitist tendencies, and stood in the way of the extension of football to the working classes. This exclusive position led to creation of another governing body, the Associação Paulista de Esportes Atléticos (Paulista Association of Athletic Sports-APEA), which promoted football across all social classes.
Liga Paulista de Foot-Ball invited Torino to play against  São Paulo league teams.
Not to be outdone, the APEA issued an invitation to Pro Vercelli. This was quite a coup, as
Pro Vercelli had been national champions in 1913 (they were champions seven times between 1908 and 1922). 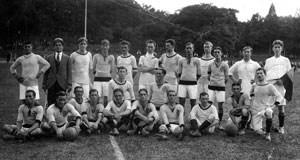 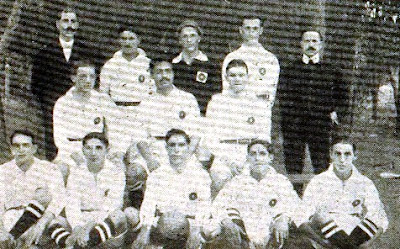 * Torino's winner was controversial- a 'Wembley-Tor', awarded by Referee Charles Miller after  Di Bernardi's shot hit the crossbar and bounced down without clearly crossing the line.
Vittorio Pozzo's verdict on the hosts was: Corinthians can go to Europe and face any of the teams there without fear .
**Some sources list the League selection team  as AMEA League XI, however, AMEA was not founded until 10 yrs after this trip took place. The governing body in Rio football at the time was LMSA-Liga Metropolitana de Sports Athléticos. The League XI was a combined Flamengo /América team.