Football has been played in many places and against some impressive backdrops, but this takes some beating! Red Square, Moscow. St Basil's behind one goal, Lenin's Mausoleum and the walls of the Kremlin along one touchline and the GYM Central Store along the other.
An exhibition match was planned for Sportsman’s Day (6th July 1936). Originally Spartak were to take on their rivals Dynamo.  Dynamo, however, withdrew from the fixture and Spartak provided both teams. The playing surface was a thick matting laid over the cobbles of Red Square.
Leading Soviet dignitaries were present, including Comrade Stalin himself.  The exhibition was originally planned as a half-a-hour match, but was extended to 43 minutes because Stalin was so absorbed in the proceedings.
The 'Spring' half of the 1936 season finished a few weeks after this match, with  Dynamo as champions and Spartak in 3rd place. In the Autumn season  Spartak claimed their first title. 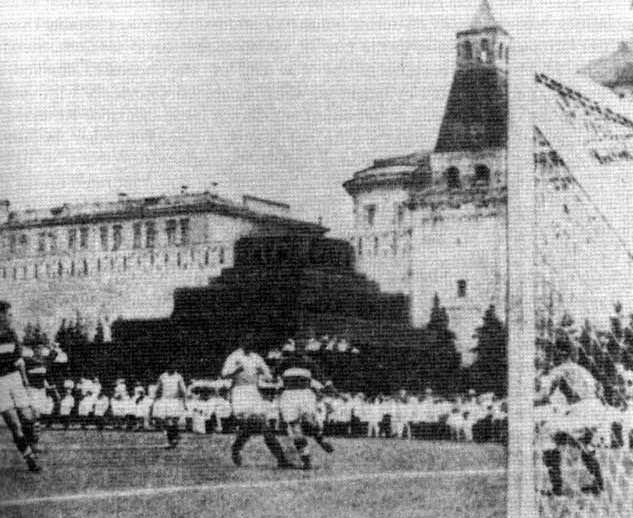 The Father of English Football

Hardeep Singh Kohli looks at the work of Ebenezer Morley and the founding of the Football Association.


Brazil's first taste of World Cup football came at Parque Central, Montevideo on July 14th 1930. It was a Monday lunchtime kick-off . Reports of the attendance vary widely, FIFA quoting a  a very exact 24059.
Brazil lined up as follows:
Ten of the players were making their debuts, and there were 6 changes for the second game a week later.


Joel Monteiro (América)
26 year old Joel was making his international debut, although he had previously represented Brazil in a match against Ferencvaros. He was replaced by Veloso (Fluminense) for Brazils remaining 2 matches in the tournament.

Alfredo Brilhante da Costa (Vasco)
Brilhante was 25 when he played this, his only international. he is one of many players to have been credited with the 'invention' of the bicycle kick.

Fausto dos Santos (Vasco)
Maravilha Negra was one of the first Brazilian stars to play in Europe for Barcelona and Young Fellows (Zurich) , He played only 5 internationals and died at the age of 34.

Fernando Rubens Pasi Giudicelli  (Fluminense)
Fernando later played in Italy for Torino and became the first Brazilian to play for Real Madrid. He made only 3 international appearances- 2 at the 1930 World Cup.

Policarpo Ribeiro de Oliveira -Poly or Poli  (Americano)
Poly spent 20 years at Americano. He was 22 when he made his debut - his only international

Nilo Murtinho Braga (Botafogo)
The only member of the XI with previous international experience. Nilo made a total of  19 appearances, scoring 11 goals.

Abraham Patuska da Silveira- Araken (Santos)
The sole São Paulo player in the team. This was Araken's only international appearance.


João Coelho Neto- Preguinho (Fluminense) - cap
Preguinho was the son of a famous writer and politician. He was 25 years old when he led Brazil and scored their first ever World Cup goal. He was an allround athlete. He played in 5 internationals, scoring an impressive 9 goals (though this includes 5 in a match against club side Andarahy)


Teóphilo Bettencourt Pereira (São Cristóvão)
The veteran of the side at 30 years, he had been a Carioca champion as early as 1917 with Fluminense. He made 5 international appearances, scoring once.

Coach: Píndaro de Carvalho Rodrigues
One of the players to defect from Fluminense to form Flamengo in 1912, Pindaro had played in Brazil's first international and had been a South American Championship winner in 1919. This was his first game in charge of the Seleção.

Brazil's opposition in this match came from The Kingdom of Yugoslavia.
Yugoslavia fielded a  very experienced team, consisting of nine Serbians,  a Montenegrin and a Serbian born German/ Czech. They went on to reach the semi finals. 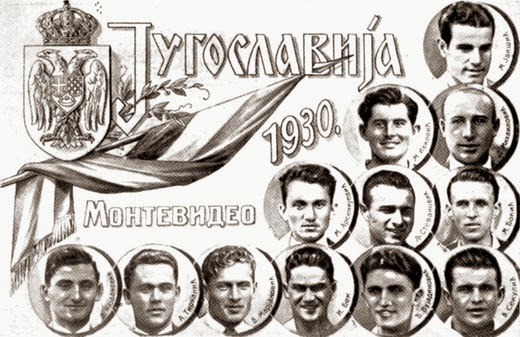 Milovan Jaksic (SK Soko)
The Montenegrin was first choice keeper for  BASK Belgrade, (named SK Soko until 1931) for 9 seasons and also spent a season with Slavia Prague. This was the third of his 9 internationals, and his nickname El Grande Milovan originated in this game. After the war he was involved in setting up Crvena Zvezda.

Milutin Ivkovic (SK Soko) cpt
The towering (1.88 m) Serbian defender was a Doctor. He was killed by the Nazis in 1943. This was the 23rd of 39 international appearances.

Dragan Mihajlovic (Beogradski SK Belgrade)
Nicknamed The Vampire, he played 4 matches for Yugoslavia (this was the second). He emigrated to Australia during the war.

Milorad Arsenijevic (Beogradski SK Belgrade)
This was Arsenijevic's 17th international. He won 52 caps in total and was later manager of Yugoslavia.

Ljubisa 'Leo' Stevanovic (Sète, Fra)
Stevanovic was making his debut in this match- he was 20 years old. He played a total of 4 internationals and spent most of his playing career in France.

Aleksandar "Tirke" Tirnanić (Beogradski SK Belgrade)
Tirnanić celebrated his 20th birthday the day after this match. It was his 6th outing. He went on to make 50 international appearances scoring 12 goals. He made over 500 appearances for BSK and later managed Yugislavia. Along with Marjanović he became a professional after the World Cup. They were the first professionals in Yugoslavia.


Blagoje "Moša" Marjanović (Beogradski SK Belgrade)
Scored 36 international goals in 57 appearances.This was his 16th international. Became a professional after the World Cup.
Ivan Bek (Sète, Fra)
Half German, half Czech, Bek played international football for both Yugoslavia (7 games, 4 goals) and France. He spent most of his playing career in France and was a member of the French resistance during the war.This was his second international.

Branislav Sekulic (SK Jugoslavija Belgrade)
Plied his trade in France and Switzerland after the World Cup. He was making the 4th of his 17 international appearances in this match.
Coach: Bosko Simonovic

Brazil were the group seeds, and despite Yugoslvia's relative experience, it was a surprise that they won this match and consequently the group. Tirnanić opened the scoring in the 21st minute, Bek adding a second on the half hour. Preguinho pulled one back after 62 minutes but Jaksic put in a formidable display to protect Yugosavia's lead. 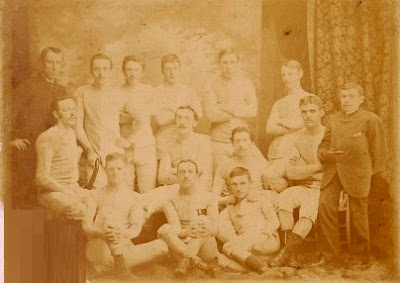 Everton had been in existence for some 14 years before the breakaway that led to the formation of Liverpool. Formed as St Domingo's in 1878, their first great rivalry was with another Merseyside club, Bootle.
Bootle was  founded in 1879 as Bootle St John's by Rev. Alfred Keely who had moved to the area to become the Curate of St John's church. He was a keen association player, though at the time Rugby football was more popular in the area. The team was made up of former public schoolboys.  When Rev. Keely moved south in 1882 these chaps defected from Bootle and formed another club, Liverpool Ramblers. 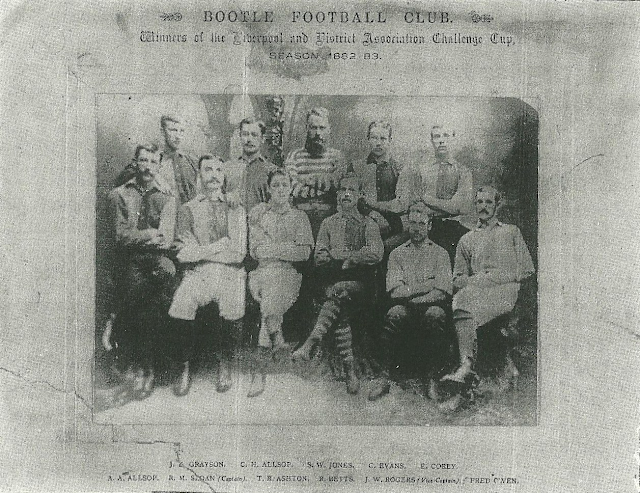 Bootle won the first ever Liverpool Senior Cup in 1883 and again in 1888 and 1889. Everton won the Liverpool Senior Cup 12 times in 18 seasons in the 19th century. Some conspiracy theorists state that Bootle were the strongest team on Merseyside in the 1880s, and that Everton achieved their place in the Football League under William McGregor's one club per town rule due to either bribery or Freemasonry.The head to head results between the two clubs suggests that Everton were in fact the more deserving of the 2, Bootle's ascendancy being confined to the 1880 and 1883 seasons.  Whereas Everton became founder members of the Football League, finishing the first season in 8th place, Bootle were among the teams that formed the The Combination for the 1888-89 season. They applied unsuccessfully to join the League in 1889 and 1890  and were finally admitted in 1892. Financial difficulties led to Bootle resigning after one season, their place in the league being taken by Liverpool.
In compiling the list of results I consulted Tony Onslow's The Forgotten Rivals and  backed this up with my own research using the archives of the Liverpool Mercury.