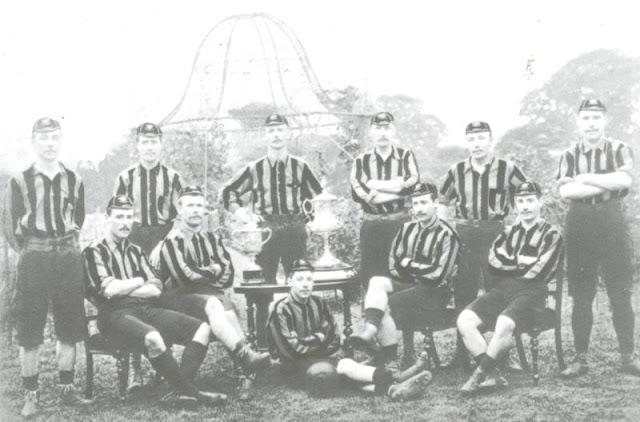 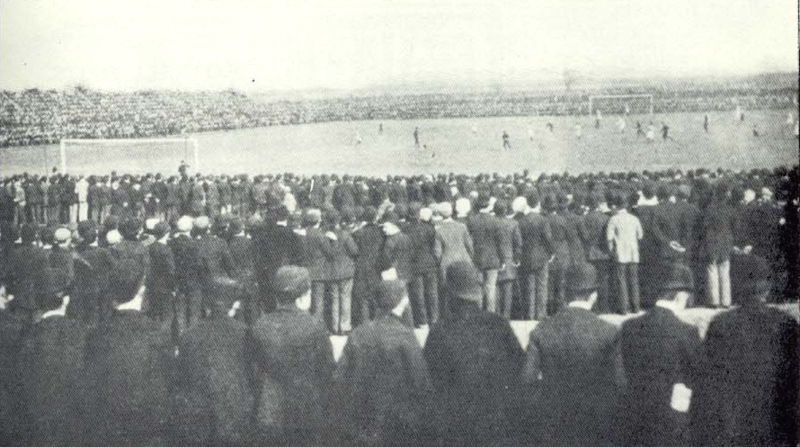 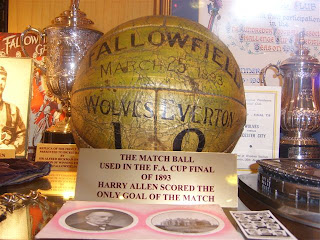 Perhaps the greatest concession made by the Football Association to the fact that football  was becoming essentially a workingman's game was the staging of the FA Cup final in the northwest of England for 2 seasons.
With the exception of the replay in 1886 the Cup Finals had all been played in London, and all bar one at The Oval. This cricket ground was, however, becoming unfit for purpose as the game grew in popularity. 25,000 had watched the 1892 final. As yet there were no big clubs in London, so there was no suitable venue in the capital.
And so it was that in 1893 the Fallowfield Stadium (also known as Manchester Athletics Stadium) hosted the FA cup final between Wolverhampton Wanderers and Everton.
45,000 paid to get in but it is estimated that 60,000 were in attendance. 192 police officers were deployed to deal with this crowd. 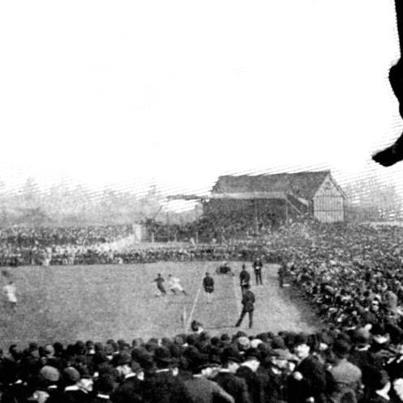 Contemporary accounts describe the crowd as having a direct influence on the game, with the wingers being hampered by encroaching fans. Both sides protested against the game being played as a competitive fixture before the kick off.  Everton later appealed again that the game had been played in unfit conditions.The referee Mr C.J Hughes overruled the protest stating that, In his opinion, that there had not been sufficient interference with play to justify another match. The Everton protest was then withdrawn  A contemporary report in the describes some conflict between the police and spectators and liberal use of the baton, but rather dubiously commends the way the crowd  stayed behind the ropes. 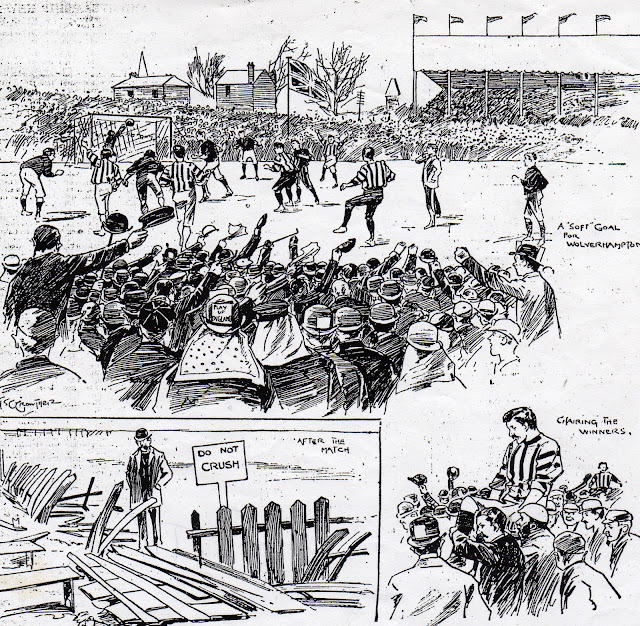 The scene at Fallowfield on Saturday beggars description. The ground, it was theoretically estimated, was capable of  holding 60, 000 but as a matter of fact the exact number present was 68, 211 - far too large a crowd to be comfortably accommodated. The fact is there were thousands who could not get a sight of the game and naturally they pressed to the front. Up to half passed two the barriers held firm but they were not constructed to stand prolonged pressure and a quarter of an hour later there was an ominous crash and hundreds rushed through the opening and immediately filled the space between the reporters and the touchline. Some of the pencillers stuck to their posts as long as it was possible, but when the crowd behind began to fling sods, drainpipes and stones, they fled to the pavilion and their places were taken by a howling mob who quickly smashed the desks by using them to stand on.
Northern Daily Telegraph, 21.3.1893. 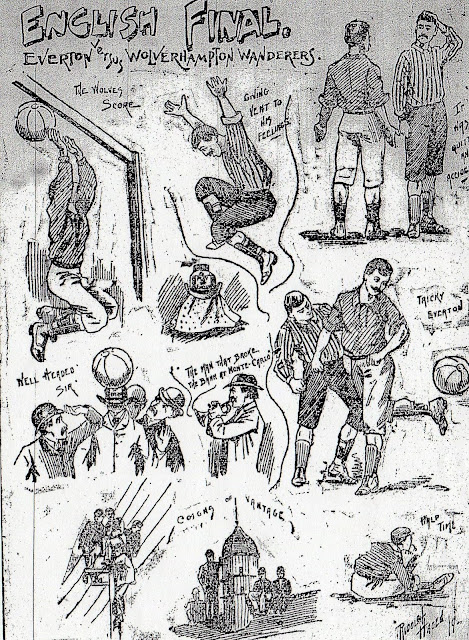 Everton were expected to win. They fielded a reserve team against Wolverhampton's first XI the week before the final and had won . Wanderers, however, provided a shock, winning the chaotic final 1-0 with a long range effort from Harry Allen.
Public sympathy lay with Wolverhampton. There were a number of reasons for this- Manchester Merseyside rivalry existed even then, so many  locals would have plumped for Wolves, who could also depend on neutrals to support them on account of their position as underdogs. There was also the matter of nationalism- the illustrations above and contemporary accounts of the match refer to  'play up England ' favours being worn by some spectators: Wolverhampton  fielded an English born XI whilst Everton had 6 Scotsmen on the park. 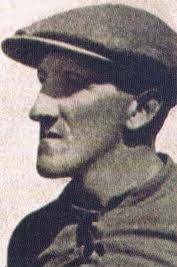 Scholars of postwar football will tell you that Brazil adopted the colour yellow in 1954. We, of course, do not go beyond 1937. During the early years of the Seleção the kit was generally white with blue as a change colour (in 1917 kits of  both plain red and yellow and green stripes were briefly used).
There is, however, a game from our era in which Brazil wore yellow- or to be more precise the gold and black of Penarol.
More remarkable, perhaps, is the fact that Brazil's opponents that day were Argentina, who in place of their familiar albiceleste wore the celestial blue of their neighbours and rivals Uruguay.
The scene was Estádio das Laranjeiras, Rio de Janeiro, June 1st 1919. A crowd of 17,500 watched the match between the recently crowned South American champions and their guests Argentina. Nominally at stake was the Copa Roberto Chery, but in fact the friendly match was a fundraiser.
On May 30th 23 year old Roberto Chery had died of peritonitis in a Rio hospital. Chery had been in the hospital to undergo an emergency operation on a strangulated hernia that he had sustained whilst playing for Uruguay against Chike in a South American championship match at Estádio Laranjeiras on May 17th.
Penarol goalkeeper Chery had travelled to Brazil as an understudy to the veteran Cayetano Saporiti. 32 year old Saporiti had played 48 internationals by the time Chery was given his debut- and would go on to represent Uruguay 51 times in total. Chery, known as Poeta on account of his passion for poetry, was touted as Saporiti's long term replacement. Tragically Chery's first international would also be his last.
The temporary Aurinegros and Celestes shared 6 goals in the match, and the Copa Chery was presented to Penarol. 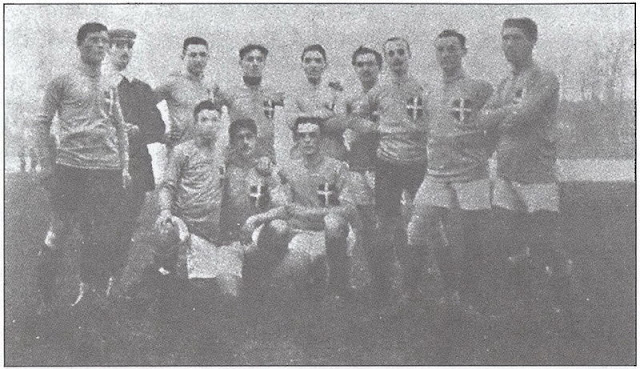 The XI selected for Italy's 3rd international (v Hungary, 06.01.11) were the first to wear the famous blue jerseys that have given the national side their nickname- Azzuri. Italy had previously played in white. In the 1910 trial match the reserve side (The Possibles) had worn blue.


Hungary won the match 1-0 with a goal from Imre Schlosser.

The late Victorian and Edwardian era were something of a Golden Age in mourning. The Memoriam card was much favoured among the working classes and the urban tradesmen who were at the time patronising professional football in rapidly swelling numbers.
The era is not generally noted for it's black humour- but these In Memoriam cards display evidence of the sort of wit that has always graced the terraces. 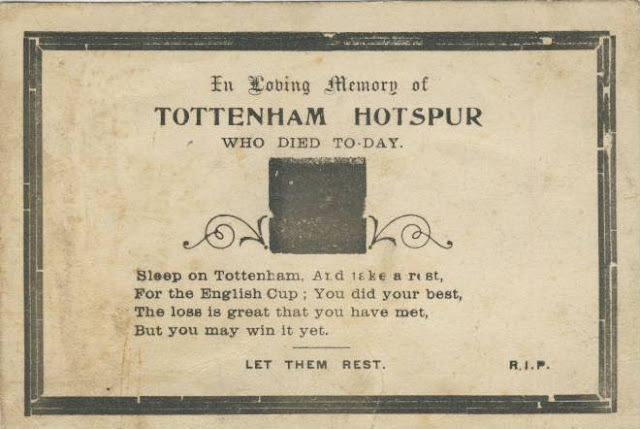 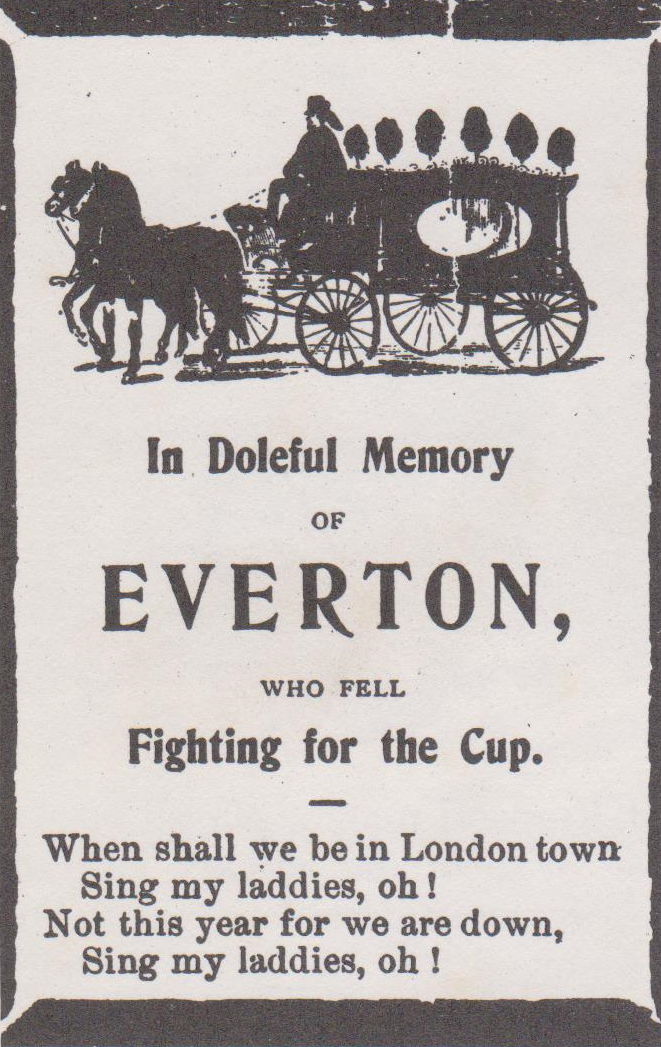 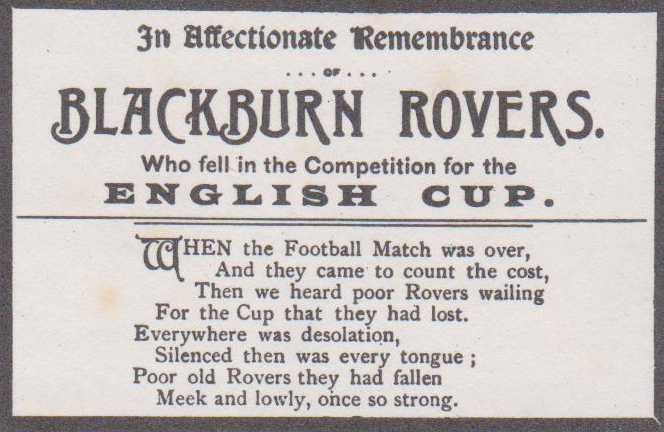 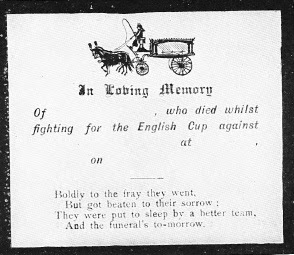 The card above was supplied blank so that the supporter could fill it in himself... 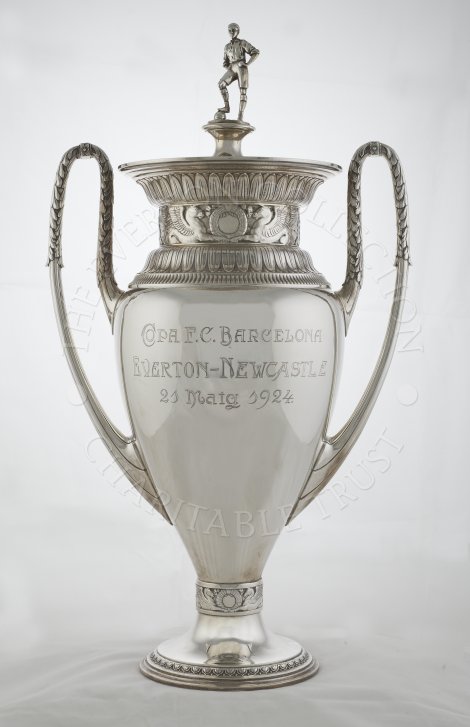 It would appear that The Copa Barcelona was contested only on two occasions. Barcelona was a very popular venue for British touring teams in the 1920s and in 1922 and 1924 the tourists played each other in Les Corts for the Copa.
(There was an earlier, unrelated Copa Barcelona, an early edition of the Catalan championship held in 1903 and won by...Barcelona).

1922
The 1922 Copa Barcelona was contested by St Mirren and Notts County. The match marked the official opening Barcelona's new stadium at Les Corts.
Saint Mirren had finished 8th in the Scottish League in the 1921–22 season.Their opponents had finished 13th in Division 2, but had (as the poster tells us) reached the semi finals of the FA cup.

Saint Mirren won 2-1 after extra time thanks to 2 goals by Dunky Walker (Saint Mirren's highest scorer of all time). 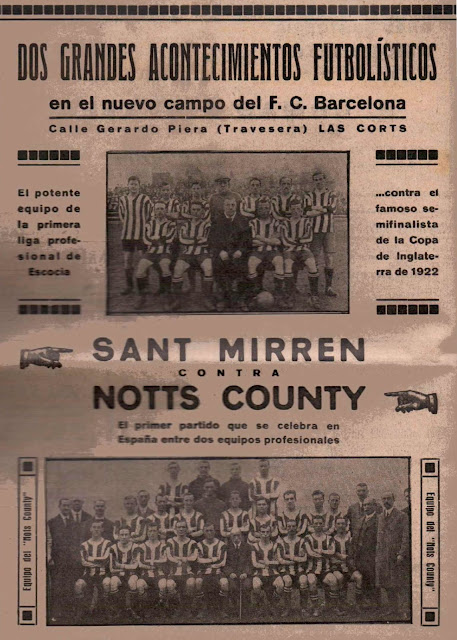 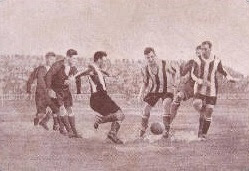 1924.
In May 1924 FA Cup winners Newcastle United took on Everton at Les Corts.
On this occasion the Copa Barcelona was won by Everton, the score being 3-2.
The Everton minute books reveal some interesting details of the preperation and negotiations regarding the tour:

Spanish Tour - The Secretary submitted new quotations re the proposed trip to Barcelona & stated that the price was now increased by over £11 per head. It was agreed that the Chairman go fully into the matter & if necessary obtain further quotations. An application for us to play 2 matches in Madrid following those in Barcelona was gone into & it was decided to ask the Real Madrid FC for a guarantee of £500 for these.

Spanish Tour-  Sec. reported receipt of a telegram from the Barcelona F.C asking if we would play a match v N'cle United on the 22nd May in place of the match on the 15th. It was agreed to do so subject to their paying us an additional £200.

Continental Tour -The Secy reported & presented a statement of a/cs for this amounting to £1009 & these were approved. The Chairman gave a report of the Tour & stated that same had been very satisfactory having beaten Barcelona FC 2-1 lost against same team 1-2 & beaten N'cle United 3-2 for which we had received a Cup.

The 7 a side international

This is an account of one of the strangest sets of circumstances surrounding a football international , and which  illustrates the attitude towards race in South America in the 1920s.
In 1920 Brazil were on their way home from the South American Championship in Chile. They stopped off in Buenos Aires to play a friendly. Argentina had won the championship match between the two sides on 25.09.20 by 2-0.
The match was originally scheduled to be played on Sunday October 3rd, but was postponed due to torrential rain.
In the meantime this scandalous article had appeared in the Buenos Aires press: 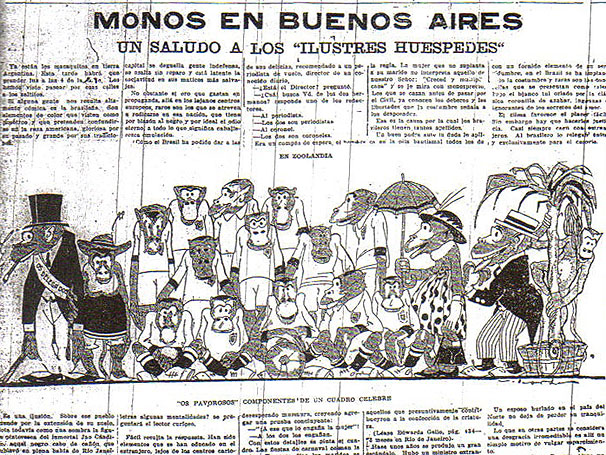 Monkeys in Buenos Aires- welcome to the illustrious guests- Crítica 3.10.20

The Brazilians were depicted and referred to as monkeys. In the accompanying article (written by a Uruguayan) the morals and conduct of Brazilians was mocked.
When the game came to be played on October 6th the Brazilians responded to these slights (though they did  not present a united front). The Brazil captain, Sisson, tried to persuade his teammates to boycott  the match. 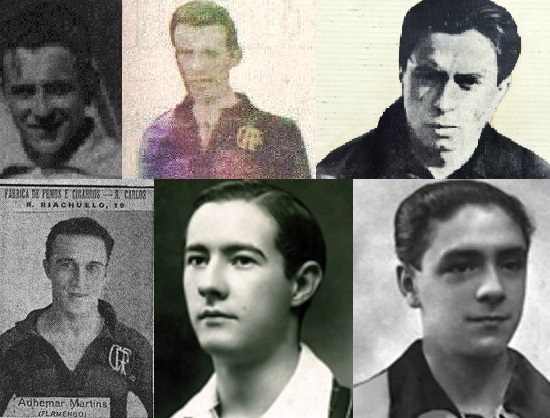 Eventually six of the party, Sisson, Japonés, Junqueira and Rodrigo (Flamengo), Fortes and Zezé (Fluminense)  refused to participate in the match. Telefone  (Flamengo) was sidelined.
Only 6 of the Brazilian party travelled to the ground. Former player, now trainer and administrator Osvaldo Gomes agreed to play. Gomes' last international  appearance had been in 1914.
In order to avoid the repercussions of an abandonment  Argentina loaned the Brazilians 4 players.
When the crowd got wind of this disturbances broke out and play was suspended. 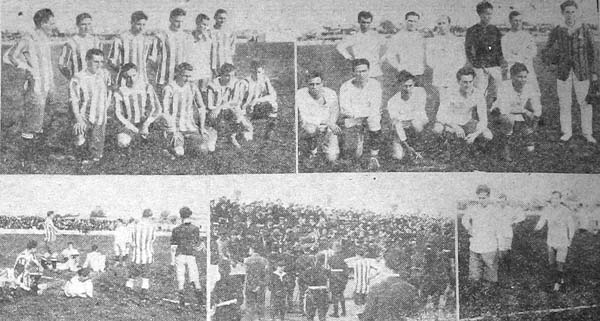 Scenes of chaos at Campo do Barracas

The innovative solution to placate the crowd of 5,000 and to avoid a riot occurring was for Argentina to match Brazil, and play a game of 7 per side. Brazil's plight was heightened by the fact that of their 6 available  regular players, 2 were goalkeepers. Kuntz played as a fullback whilst Ayrton played in goal.

And so the line ups were:
Brazil:

Argentina ran out 3-1 winners in what is unsurprisingly not considered a 'full international'. Castelhano got the Brazil goal, whilst  Echeverria (2), and Lucarelli scored for the hosts.

If you read about this match on iffhs you will find a distorted explanation of events which has the Brazilians unable to field a full team due to sickness.


Fred Dewhurst was a member of the Preston North End 'Invincibles', the leading professional side of the late 1880s described by one contemporary journalist as a 'machine',

For Preston Dewhurst appeared in the 1888 FA Cup Final , scoring in the 2-1 defeat to West Bromwich Albion.
The following season, in which The Invincibles won the double, he again scored  in the Cup Final (in a 3-0 win over Wolverhampton Wanderers) and claimed 12 goals in 16 League appearances.
In League football  Dewhurst scored a total of 13 goals in 24 games.
Unlike his teammates at Deepdale Dewhurst, a teacher at  Preston Catholic School, was an amateur. This enabled him to also represent the greatest amateur side of the day, Corinthian FC.
He represented Corinth 29 times (1884-89) scoring 14 goals.

Dewhurst played 9 times for England. He scored in 8 of these 9 games and hit 12 goals in total:

The great football writer J.A.H Catton (Tityrus) wrote of Dewhurst:
(He) was a big, vigorous build of a player and talented, but he had not the science of his colleagues. ...he could simply walk over his opponents-and did.
Dewhurst died on April 21, 1895, at the age of 32. 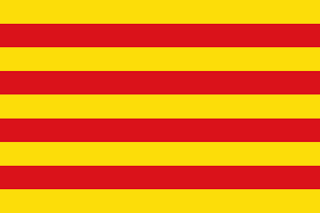 Catalunya (Catalonia) pioneered  the development of organized football in Spain.
Football Associació de Catalunya was founded in 1900, the first football association in
Spain.
A Catalan representative team appeared as early as 1904, and over the years Catalunya have played fixtures against a variety of opposition. Catalunya won the regional championship, the Copa del Príncipe de Asturias, in  1916, 1924 and 1926.


In giving the names of the Spanish regional sides I have tried to avoid causing offence to the people of the countries in question through my ignorance of the languages concerned. Any misuse is unintentional.