Captains of Wales in the 19th Century

Kenrick
1. Llewelyn Kenrick (Druids/Shropshire Wanderers)
The man who started it all. Kenrick, a solicitor, was the driving force in the foundation of the Welsh Football Association. He organised the team selection for the first international (v Scotland at Hamilton Crescent (25.03.76) and captained Wales in 4 matches (1876-79), all of which were lost.

2. George G Higham (Oswestry)
Higham played 2 internationals . His only game as captain was a 9-0 defeat away to Scotland (1878).

3. John Morgan (Cambridge University , Swansea*, Notts County, Derby School)
Swansea born Morgan was a schoolmaster and author of grammar textbooks. In 10 international appearances he led Wales 7 times (1880-82) . He was captain when Wales beat England for the first time (1881)
*no connection with Swansea Town/City, but an earlier club. 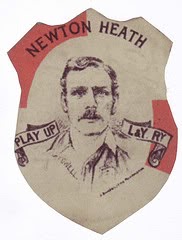 Powell
4. Jack Powell (Druids, Newton Heath)
Powell, a strapping 1.88m full back, personifies the changes that occurred in the Welsh football scene as professionalism spread. He was first capped in 1878 when playing for Druids (based in the Flintshire village of Ruabon). Later in his career he played for Bolton Wanderers (he had to leave the club due to an issue over his eligibility , as a professional, in an FA Cup match) and was a prominent member of Newton Heath's side in their first season in competitive football.
He captained Wales 6 times (1883- 88).


5.William Pierce Owen (Ruthin Town).
Owen had a brother and 2 cousins who also represented Wales. He played 12 internationals and scored 6 goals. He was a solicitor. He led Wales on 2 occasions (1883-84).

8. Dr Alfred O Davies  (Swifts, Wrexham)
Dr Davies captained Wales twice in 1888  when he was playing for Swifts (Slough) and once in 1889 when he was with Wrexham. He also played for Crewe Alexandra.

10. Richard E Turner (Wrexham)
The goalkeeper had the misfortune to ship 7 goals in his one match as captain, Ireland winning 7-2 in Belfast (1891).

11. James Trainer (Preston North End)
The Invincibles goalkeeper had begun his career with Wrexham and then moved to Lancashire, where he played for Great Lever and Bolton Wanderers before joining Preston North End in 1887. He won 20 caps over a 12 year period (1887-99). Trainer was captain on 11 occasions. 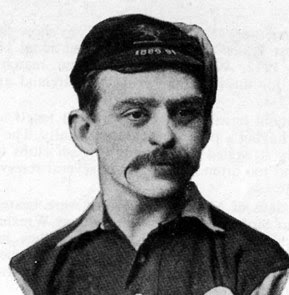 Lea
12. Arthur Lea (Wrexham) Arthur Lea only had one arm. He was a versatile half back/inside forward.  He won 4 caps and captained Wales once, a 4-3 defeat at the hands of Ireland in 1893.

14. Charlie Parry (Everton, Newtown)
Parry played for Everton and Ardwick before returning to Wales to play for Newtown and  Aberystwyth Town. Consequently he captained Wales on one occasion whilst playing his club football in the Shropshire League. Jenkyns
15. Caesar Jenkyns (Walsall) Jenkins was captain for England's visit to the Racecourse in 1898 which ended Wales 0 England 3.


16. Jack Jones (Tottenham Hotspur) 21 caps for this half-back who had grown up in Liverpool and played for Bootle, Grimsby Town and Sheffield United before joining Tottenham. He was the first Tottenham player to win international honours. 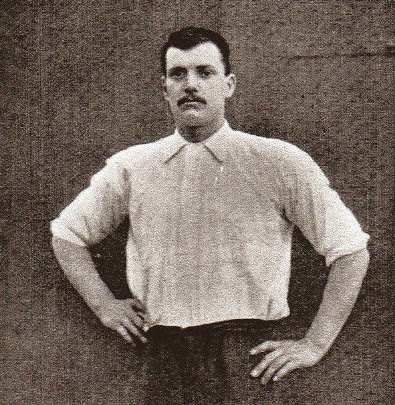 18. Di Jones (Manchester City)
Jones was a Chirk boy who played for Bolton Wanderers and Manchester City
He made 14 international appearances. Tragically he died of tetanus as the result of an infected injury in 1902.