The Budapest Cup was won by Celtic at Burnley's Turf Moor on September 1st 1914.
Burnley is 1600 km from Budapest, so some explanation is required.

Central Europe was a popular tour destination for English and Scottish clubs, and in the summer of 1914 both Celtic (Scottish Double winners) and Burnley ( then in the First Division of the Football league and 1914 FA Cup winners) undertook tours of Hungary, Austria and Germany.
The Hungarian authorities arranged a match between the two. A silver trophy shaped like a lighthouse would be the prize, and the profits made from the fixture would be donated to charity.
Apparently Celtic were unaware of the fixture until they arrived in Budapest.
However, 4 days after Celtic had begun their tour with a 2-2 draw against Ferencváros they faced Burnley (at Ferencváros' stadium). 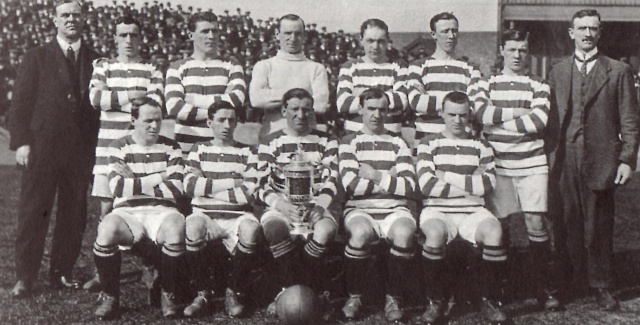 May 21st was a hot day in Budapest and the two sides met on a dry and bumpy pitch before a crowd of around 10,000. The match was a hard and ill tempered contest. Jimmy McMennemy put Celtic in front through a  20th minute penalty. Burnley equalised from the penalty mark in the second half when Sunny Jim Young handled. Contemporary reports suggest that Celtic declined to play extra time. They agreed to travel to Burnley at a later date for a replay. The Hungarians would forward the trophy. 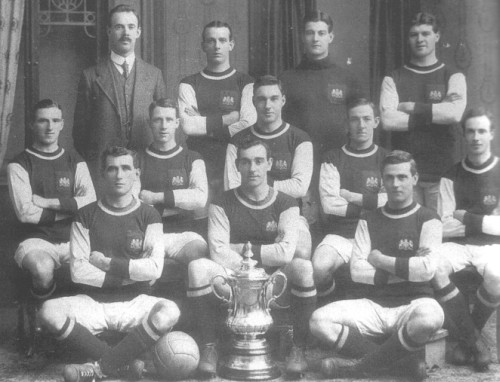 Celtic continued on their tour with healthy wins over Wiener (6-2) and Hertha Berlin (6-0). VfB Leipzig beat the Scots 1-0 but BFC Preussen were dispatched 5-0.
The dates of Burnley's tour matches are not recorded clearly. However following the match with Celtic they lost 3-1 to Ferencváros before beating a Hungary Select XI. During the course of their travels thy also beat Viktoria Berlin and Rapid Vienna. The result of the match with DFC Prag is unknown.


The replay was held at Burnley's Turf Moor on September 1st 1914.
At half time with the score at 0-0 Celtic were reduced to 10 men by injury. However they took a 2-0 lead by the 70th minute through Jimmy McColl and Patsy Gallagher. Burnley got a late consolation from the penalty spot.

Of course, in between the 2 games, war had broken out. The intriguing trophy never reached Britain, but in 1988 Ferencváros presented Celtic with a vase to commemorate their victory.
Interestingly the clubs donated a share of the gate money from the repaly (the attendance was 10,000)  to the Budapest charities that the original match had been arranged to support (even though Britain and Hungary were now at war).

The Capocannoniere is the top scorer in Italy's Serie A. As we have seen, before the introduction of the single national league in the 1929-30 season, the national Championships were a complicated affair. However, records relating to the highest scorer are reliable from the 1923-24 season onwards.
1923-24: 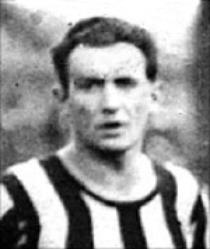 Heinrich Schönfeld (Austria)- Torino- 22 goals in 20 games scored 51.1 % of his team's goals).
Schönfeld made his debut in professional football at the age of 16 playing as a goalkeeper. After spending 3 seasons in Italy (2 at Torino and 1 at Inter Milan)  Schönfeld returned to Austria to play for Hakoah Vienna. He later spent 3 years in the USA ( Brooklyn Wanderers, Brooklyn Hakoah and New York Hakoah) before returning to Italy. 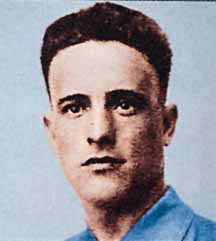 Mario Magnozzi - Livorno - 19 goals in 24 appearances. (Livorno finished mid-table in Northern Group B, scoring 45 goals. Magnozzi contributed 42.2% of his team's total goals).
Magnozzi was capped 29 times by Italy and appeared in the 1924 and 1928 Olympics (winning a bronze medal in the latter).

Ferenc Hirzer (Ferenc Híres- Hungary)- Juventus - 35 goals in 26 games (41.6 %).
Hirzer was capped 32 times by Hungary in a 10 year international career, including 2 appearances at the 1924  Olympics . He played top level football in Hungary, Germany and Italy  He had two productive years at Juventus, scoring 50 goals in 43 games. He was Capocannoniere in his first season with Juventus, in which they were National Champions. 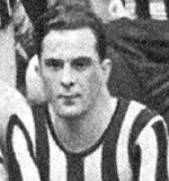 Antonio Powolny (Anton Powolny -Austria ) Internazionale- 22 goals in 27 games (35.4 %).
1926-1927  was Austrian born Powolny's only season at Internazionale. Inter finished in 5th place in the final group of 6. Powolny moved on to continue his career in Hungary. 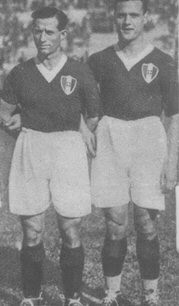 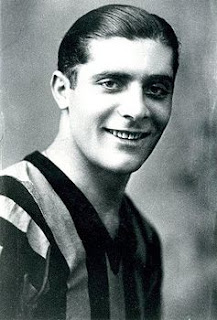 Giuseppi Meazza -Ambrosiana- 31 goals in 33 games (36.4%).
Ambrosiana were scudetto winners.
Meazza spent 13 years at Internazionale/ Ambrosiana. AC Milan rejected him because he was too small and Inter misguidedly played him as a defender in the reserves. They soon rectified this error and Meazza rewarded them with a return of  242 goals in 365 games, beginning with 2 goals on his first team debut. He was Capocannoniere on 3 occasions and scored 33 international goals in his 53 appearances, winning 2 World Cups. 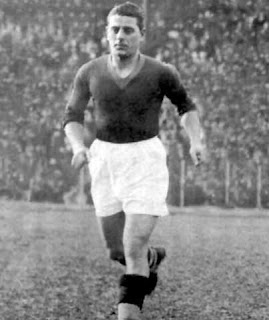 Rodolfo Volk (Rodolfo Folchi- Austria-Hungary/ Croatia) - AS Roma 29 goals in 33 games (33.3%).
AS Roma were a creation of the Italian Fascist government. Rodolfo Volk was from Rijeka (Fiume) which is now in Croatia but was part of Austria -Hungary at the time of his birth.
Roma finished the season as runners-up in Serie A. 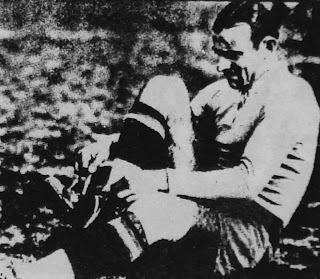 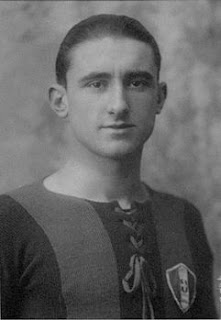 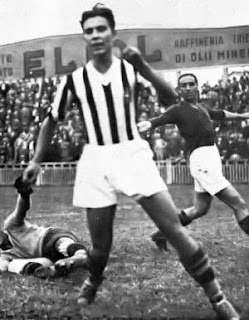 In both of the seasons in which Borel was Capocannoniere Juve were scudetto winners. A big scoring side they notched up 80+ goals in both seasons. He celebrated his 20th birthday towards the end of the second season. 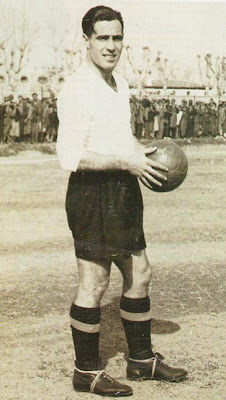 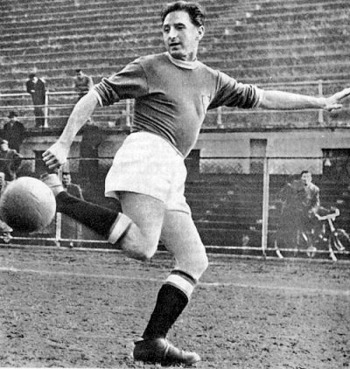 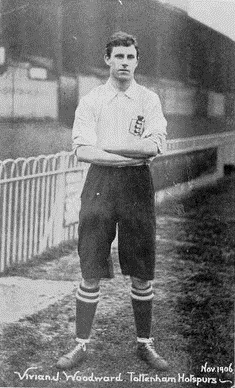 From 1906 onwards England fielded an amateur international team alongside the regular 'first team'.
There is conflict regarding the status of the matches played by this team. The Football Association does not count them as full internationals. However FIFA state that all full internationals played by the English (as well as Welsh) amateur national teams against non-British national teams until 1924 are to be considered as full "A" internationals.
In this post we will look at the England Amateur team (who played in the Olympic Games as Great Britain)  up until the outbreak of the 1914 -18 War.
During this period England Amateurs played 40 games.
They won 35, lost 3 and drew 2.
They scored 232 goals (an average of 5.8 per game) and conceded 32. They recorded double figure scores on 7 occasions and failed to score in only one match.

1906:
France were defeated 15-0 in Paris under the captaincy of Stanley Harris, who scored 7 goals for good measure. It was the only time that Harris captained the side. Vivian Woodward added 4 goals. 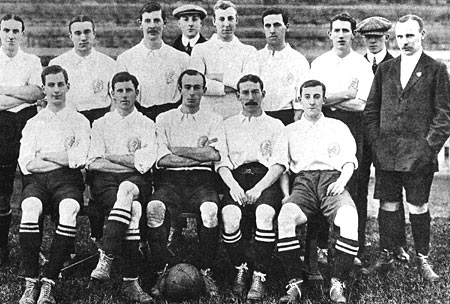 The England Amateurs team that beat Netherlands 12-1
1907:
Netherlands were beaten 8-1 in Den Haag- William Udal Timmis (Old Carthusians) having his only game as captain.
In the return at Darlington's Feethams England won 12-1. West Ham's Harold Stapely got 5. Captain was Vivian Woodward of Tottenham Hotspur who would go on to lead the Amateur XI on 28 occasions. 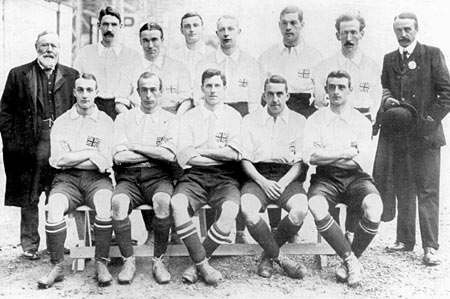 The 1908 Gold Medal winning squad
Playing as Great Britain England won the Gold medal. The matches were all held at The White City Stadium.

1910:
The gulf in class between the England part timers and the continental teams was beginning to narrow. Belgium has a 2-1 lead in Brussels and became the first team to hold England to a draw.
Switzerland and France visited Royal Park and the Goldstone Ground (Brighton) respectively and were dismissed with something approaching the old aplomb. 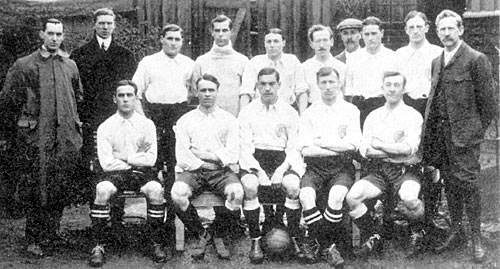 Then, on May 5th 1910 Denmark, playing their first home game in atrocious weather conditions, beat England amateurs 2-1. A second game was planned, but abandoned, as King Edward VII th died on May 6th.

A win over Belgium at Park Royal was  followed by a victory at
Stade de Paris, but the scorelines were beginning to adopt a more modern respectability. On April 14th a  crowd of 10,000 at Viktoria-Platz saw Germany hold England to a 2-2 draw. 3 days later in Amsterdam Netherlands restricted them to a 1-0 victory.

Switzerland were beaten 4-1 in Berne and a degree of revenge was inflicted on Denmark on their visit to Park Royal in October, England winning 3-0.

1912:
Netherlands were beaten 4-0 at Hull and Belgium 2-1 in Brussels before Great Britain travelled to Stockholm to defend their Olympic Title. 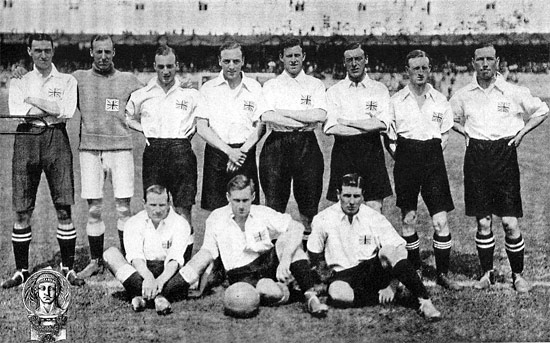 With only 3 members of the 1908 squad remaining GB beat Denmark 4-2 in the final.
Swindon Town's County Ground hosted a visit by Belgium in November, England were 4-0 winners.

1913:
The visit to Den Haag brought another defeat. Sparta Rotterdam's sprinter, Huug de Groot scored twice as Netherlands won 2-1. England got their revenge by the same scoreline when the Dutch visited Hull 3 months later. France and Germany had been routinely beaten earlier in the year.

The Captains:
8 men captained the England Amatuers / great Britain during this period. It's really a case of Vivian Woodward and 7 others:

Stanley Harris (Old Westminsters)- captain versus France (01.11.06).
Headmaster S.S Harris also captained the 'full' England team on one occasion. As this was his one match as captain of the Amateurs his 15-0 win and 7 goal personal tally must be some sort of record!

Bob Hawkes (Luton Town) In 4 games as captain Bob Hawkes endured a defeat and a draw, which as captain of England Amateurs was tantamount to disaster!

Frederick  Chapman (Oxford City)- The former Nottingham Forest center half captained in the 10-1 win over France at Brighton (16.04.1910). 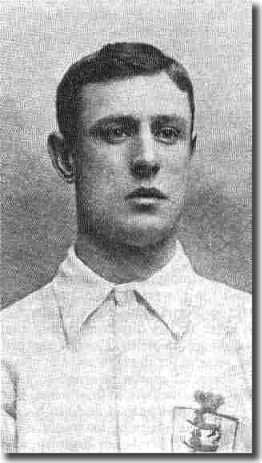 In a twenty year career as a professional, Fred Spiksley played for Gainsborough Working Men's Club, Gainsborough Wednesday, Gainsborough Trinity, The Wednesday, Glossop North End, Leeds City, Southern United and Watford.  He was capped 7 times by England, scoring 5 goals.
During a 11 year period with The Wednesday he scored 100 goals in 293 league games and 14 goals in 28 FA Cup appearances. He scored twice in the Wednesday's 1896 FA Cup Final triumph.
He was noted for his dribbling and close control and is said to be the the first player to use the 'back heel' as a regular part of his repertoire.

Spiksley, of Sheffield Wednesday... delights to dribble the ball into the corner and then centre across, and it is seldom he fails to place the ball in the goal mouth for his fellow forwards to put through. He is about ten stone, but what he lacks in weight he makes up in speed. He can play the combination game to perfection, and I can state this at first hand, as I have often had the pleasure of playing with him. When he finds himself in difficulties he will try to give the ball to someone better placed - a form of unselfishness which a good many well-known players might copy. Instead of this, many men would rather lose the ball by trying to beat one or two opponents, than give it to a partner; not so Spiksley.
Ernest Needham


Fred Spiksley could do almost anything he wanted with either foot, and was a sure marksman. Spiksley as a football player was a wonder.
J. A. H. Catton

Conjurers have sleight of hand. Let me vary the phrase and say that Spiksley had sleight of foot. He did most of his dribbling with the outside of the right foot. I do not like making sweeping statements, but I have never seen so thoroughly competent an outside-left as Spiksley, who relied not on weight, or even on speed alone, but upon his craft and power over the ball.
Sir Frederick Wall

Here's a link to a YouTube clip featuring Fred Spiksley going through some drills with a couple of Fulham players in 1931.

In the early days Queens Park were Scottish football. Then, with the introduction of professionalism and a league system their influence waned, and new superpowers emerged. For the 120 odd years that followed the dominance of the two great Glasgow clubs, Celtic and Rangers, was rarely threatened. There were only 6 seasons between 1891 and 1937 when one or other of the 'Old Firm' clubs did not win the Scottish First Division. 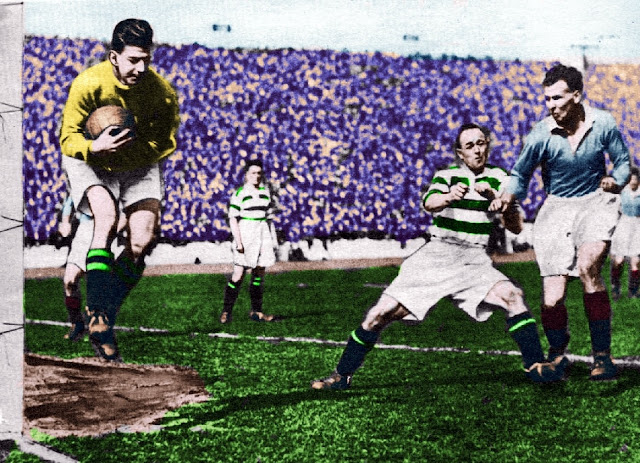 14 meetings during this period produced 17 matches (3 games being drawn)
9 wins for Celtic and 5 for Rangers
4 finals (2 won by Celtic, 1 by Rangers and one not decided).