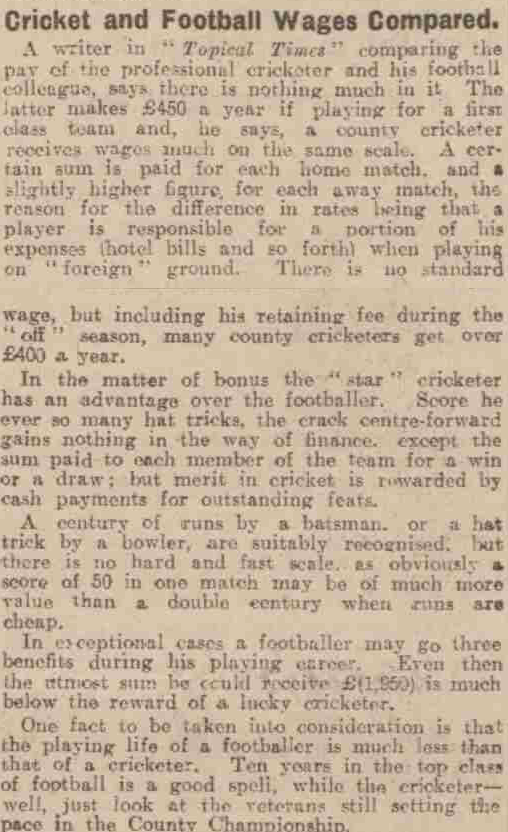 An agricultural labourer in England in 1928 would have an annual income of approximately £79.
The average national weekly wage was £2, so that's about £104 a year. 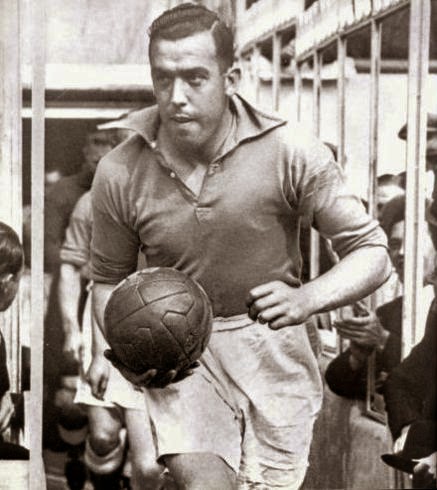 In the summer of 1904 the Austro- Hungarian Empire received a healthy dose of Scottish Football. Celtic and Rangers had finished  4th and 3rd  respectively in the league, and Celtic had beaten Rangers 3-2 in the Scottish Cup Final.
In May of that year both Glasgow sides traveled to Vienna and Prague on tour. Wiener AC had invited Celtic, whereas Rangers had been invited by the Austrian Football association to mark the 10th anniversary of First Vienna.The forward thinking Hugo Meisl was instrumental in arranging contact with British clubs as a means of developing the game in Austria.
Boldklubben af 1893 (Copenhagen) were also invited to participate in First Vienna's celebrations.

As you can see, Rangers' trip was pretty much par for the course for Edwardian continental tours- undefeated and averaging 7 goals a game. A by-product of the journey (other than tales of postcards written by the Rangers goalie during the Wiener AC match whilst his teammates kept the ball for over 5 minutes with an exhibition of passing) was the signing of an Austrian goalkeeper.
Karl Pekarna, a postman, began his career with a Vienna club confusingly called FC Sevilla. He joined First Vienna as an 18 year old and developed a good reputation- he was an exponent of what was known in Austria as the Robinsonade - the diving save, and showed good acrobatic and handling skills. The first game between Rangers and Boldklub 1893 was affected by torrential rain, and as the matches were intended to be exhibitions, the Danes suggested that they should replay in more favourable conditions.
Rangers borrowed Pekarna for the rematch, and he impressed to the extent that they offered him a contract. John Watson's position as Ranger's keeper was not assured, although he received positive reviews in the press following the Cup Final, he would play only 25 games for the club, and Rangers had signed Allan from Falkirk at the beginning of May.
In October 1904 Pekarna played for Vienna v Budapest in a city select match that was later granted the status of a full international. He would  represent Austria on one  more occasion, in 1908.
Later that year Pekarna moved to Glasgow, thus becoming Rangers' first overseas signing and Austria's first professional.

Pekarna featured regularly for the reserves, but played only one first team game,a friendly against Queen's Park at Hampden (08.05.05). He was offered an extension of his £3 10s a week contract, but opted to return to Vienna. 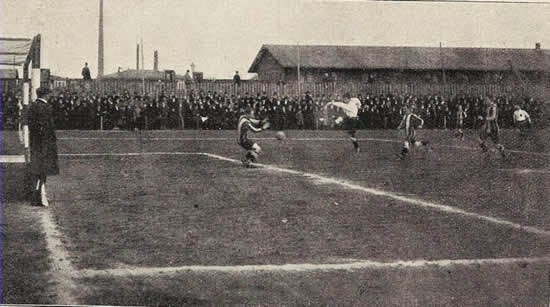 One problem that Pekarna had on his return to Vienna was the fact that he had been a professional in Scotland. Austrian football was still amateur. First Vienna re signed him, but were threatened with expulsion by the city's Association. The matter was resolved in the September of 1905.
Pekarna joined FC Wacker München in 1908, but again his status as a former professional caused uncertainty. Eventually he joined FC Bayern in 1910.
He returned to Vienna after the war, playing for Slovan. 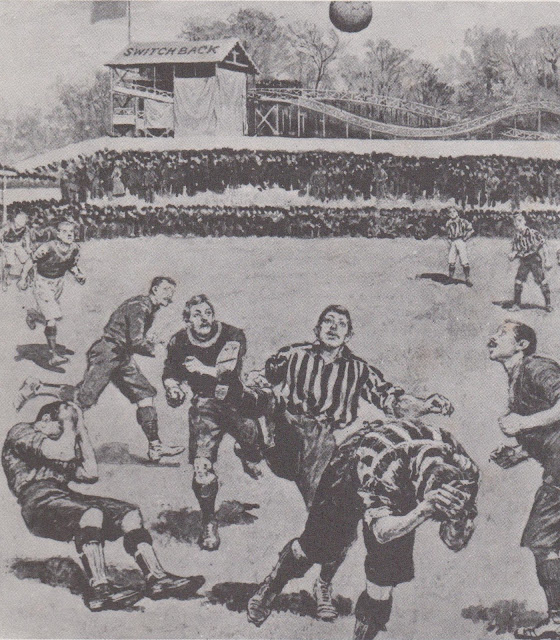 The name Crystal Palace could refer to 3 things:
1. A founder member club of the FA formed by groundskeepers at the Great Exhibition site at Hyde Park . The club existed from 1861-1876.
2. The London based Premier League club founded in 1905.

3. The sports venue.
Here we are turning our attention to the sports venue.
Crystal Palace was  the venue for the FA Cup final from 1895 -1914, 22 matches including 1 replay. 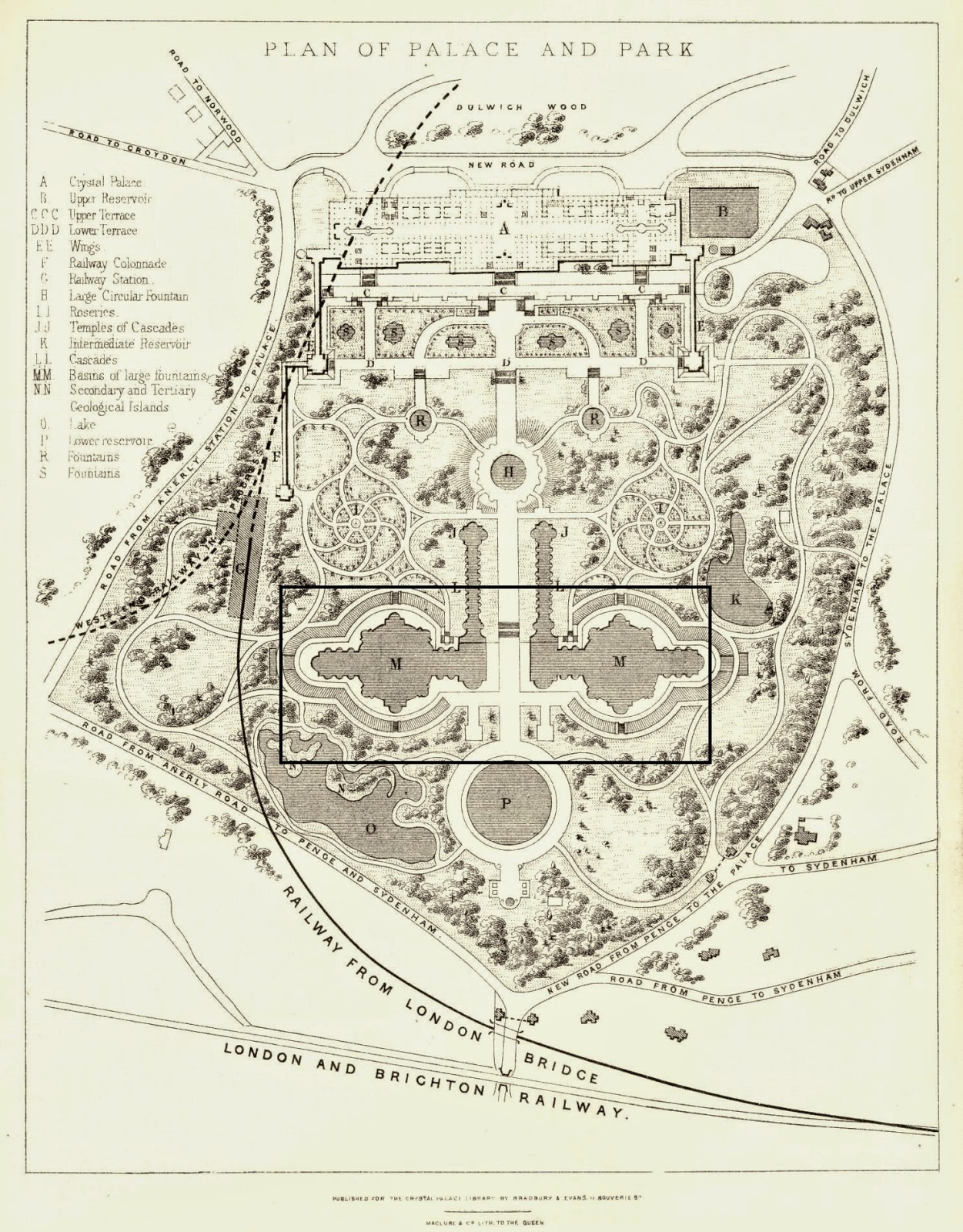 The stadium was developed in the area of the map enclosed in the rectangle. 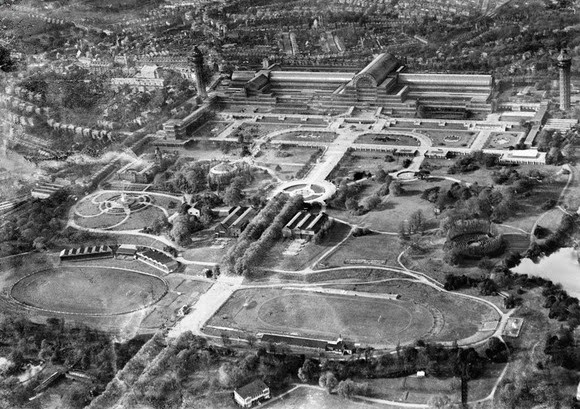 When Surrey County Cricket Club withdrew The Oval from football service there was a call to establish a national centre at which to play internationals and the Cup Final. England, of course , had been playing internationals in the north and midlands since the 1880s.
25,000 watched the last final to be played at The Oval in 1892, and the next 2 finals were played at Fallowfield and Goodison respectively. Fallowfield was a disaster, with only 45,000 out of 60,000 plus spectators paying admission, and crowd encroachment interfering with play. 37,000 watched the Goodison final.
In order to secure the contract to host the Cup Final The Crystal Palace Company guaranteed the FA  a sum equal to the Final receipts from 1894 (£1189) plus a percentage of the gate money. The 1895 Final drew receipts of £1545.
The Crystal Palace , constructed in Hyde Park for the great exhibition of 1851, was relocated to Sydenham in 1854 .
In 1895 the football stadium was created in a natural basin in the Palace Park. 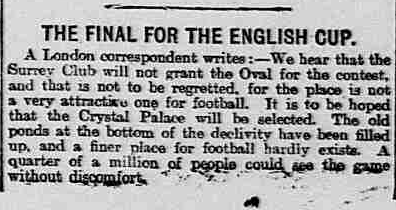 The change from The Oval was welcomed in most quarters-  the popularity of the Final as a spectacle in the professional era having outgrown the cricket ground. The accommodation for spectators was limited by the playing area being in the cricket outfield. The cricket club were also concerned about damage to the turf.
In 1895 Wolverhampton petitioned the FA to switch the all midland final against Villa to a venue more convenient to supporters- they proposed Wolverhampton!
The Final was moved to Manchester as a wartime measure in 1915, and by the time the war was over Crystal Palace was no longer considered a suitable venue.