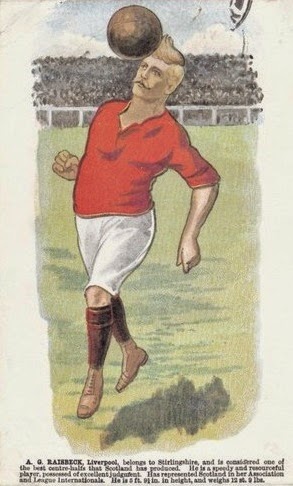 Between 1896 and 1898 Alex Raisbeck made 30 appearance for Hibernian, scoring 4 goals. In March 1898 he moved to Stoke on loan, making his debut against The Wednesday. Stoke were struggling near the foot of Division 1 and required a 'Test Match' win to keep them up.
In the close season, having made 8 appearances for Stoke (1 goal) Raisbeck was signed by Liverpool.
His debut for the Reds was also against The Wednesday.
Over the next 11 seasons he was a regular at centre half for the Anfield club, notching up 340 first team appearances and scoring 21 goals.
He was capped 8 times by Scotland (1900-08).
In 1909 he returned to Scotland and joined Partick Thistle, for whom he made over 130 appearances .

His great forte as a half back is a dashing, breezy versatility. He is like an intelligent automaton, fully wound up and warranted to last through the longest game on record. To watch him at play is to see a man pulsating to his finger-tips wth the joy of life. Swift, rapid movement, fierce electric rushes are to him an everlasting delight. One would think that he had discovered the secret of perpetual motion. He keeps on and on and never flags.
Association Football & The Men Who Made It by Alfred Gibson and William Pickford.

Footballers, although they earned tidy money, were bound by a draconian maximum wage rule . Clubs found ways to bypass these rules and Liverpool employed Raisbeck in a novel capacity to boost his earnings. He walked around Anfield and the neighbouring districts ensuring that the bill posters employed by the club were doing their job.