Two sides to every story... 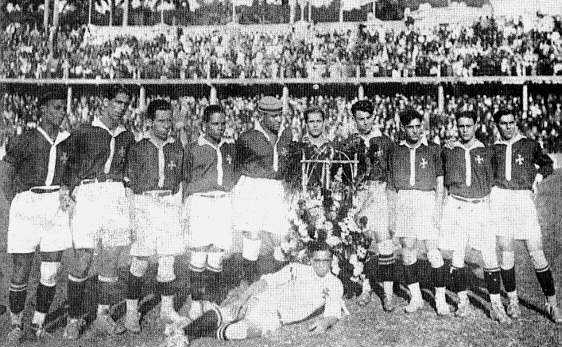 
Vasco da Gama were champions of Serie B of the Rio de Janeiro Championship in 1922. The following season they won the top league at the first attempt.On March 1st 1924, a split occurred in the Rio league.

A new governing body, the Associação Metropolitana de Esportes Athleticos (AMEA) was founded.
The Confederação Brasileira de Desportos (CBD - Brazilian Sports Confederation) backed this new organization, and withdrew their backing for the  Liga Metropolitana de Desportos Terrestres.
The AMEA was endorsed by  Flamengo, Fluminense, Botafogo and America , in fact Vasco da Gama were the only leading club that remained on the old league. They won this league with a 100% record.
There was a reconciliation in 1925. Vasco joined the AMEA. The LMDT remained as a league for minor clubs.


History-version one:
The version of events surrounding this rift which is enshrined in the history of Vasco is that the AMEA
imposed discriminatory rules that excluded blacks and lower class citizens.  Vasco da Gama were the only club to really be affected by these new rules, as they were the peoples' club and did not regulate their membership in the way that some of the other Rio clubs did - poor people and black people saw Vasco  as being their club.  There had been previous legislation that had affected Vasco- regulations had been introduced that meant that players had to be able to sign in- again, perceived as being discriminatory against the illiterate poor .
In response to this situation Vasco resigned from the league and their president, Dr. José Augusto Prestes, wrote the letter famously known as the resposta histórica . In 1925 AMEA relented and Vasco returned to the fold. They finished 3rd, behind  Flamengo and  Fluminense.

History-version two:
Brazilian football was amateur.
Professionalism was not openly adopted by most clubs until 1933, when the clubs split into two leagues, one professional, and the other amateur. The Brazilian Confederation did not endorse the professional leagues until 1937, when it finally recognized professionalism and the rival leagues were then reconciled.
However, in the early 1920s Vasco were openly practicing professionalism. The other clubs were incensed by the fact that Vasco flagrantly paid their players, offered large signing on fees and bonuses.

The rival clubs launched an investigation into Vasco's players, and identified 12 who were 'of dubious profession'. Based on this AMEA asked Vasco to exclude 12 of its players from the league. These players were black.
Denied the backbone of their squad Vasco were forced to stand down.

So, were Vasco chastised for professionalism? or shunned by racists? Or were the elitist elements that had modeled Rio's clubs as exclusive organizations for the well to do simply resentful of Vasco's success?
Modern histories tend to view the stand they took, articulated in the resposta histórica , as being central to the development of football in Brazil as a game of equal opportunity, and indeed to the notion of civil rights in Brazil.