Explaining Football to the Natives...

In 1894, in a missionary act, the Football Association of Wales decided to stage an international match in Swansea, in the south. The venue was St Helen's, a Rugby Union and cricket ground that, in a state of reduced grandeur, remains in use to this day.
In those days, as we have seen, Welsh football was centered on the north east of the country.
Swansea is about 260 km from London.
The Football Association of Wales had been founded in 1876. But football was foreign to the people of Swansea.  Football in Swansea , as in most of the southern half of the country, meant Rugby Union. In fact, as the Western Mail observed:  In this portion of the Principality the Association game is practically unknown.
In preparation for the match the Western Mail published the following plan of the pitch and an explanation of the game for the benefit of the locals: 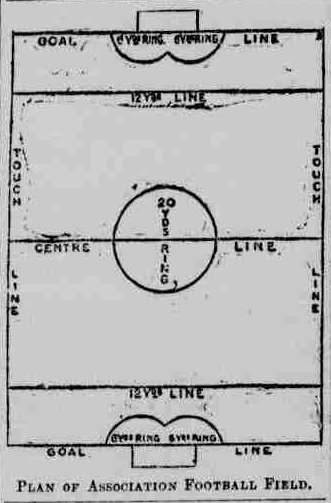 The match drew a crowd of 7,000.
Wales won 4-1, with 2 goals apiece from Billy Lewis (Chester City) and Edwin James (Chirk) after Olphie Stanfield (Distillery) had given the visitors a 1-0 half time lead.