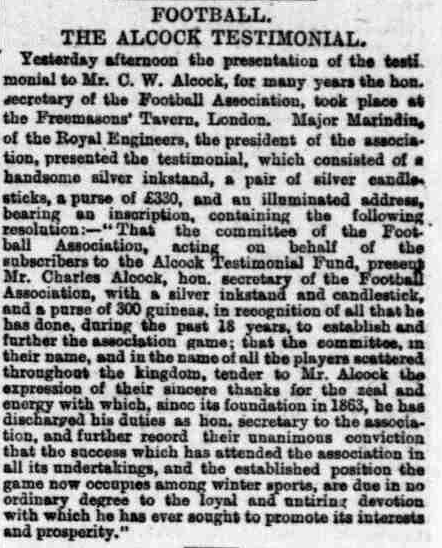 The Alcock Testimonial was raised in 1881, in the pre professional era. There is no doubt that Alcock's singular devotion to the advancement of Association football laid the foundations for its becoming the national game.
The gifts presented to Alcock as outlined above are considerable. 300 guineas compares favourably to, for example, the £92 paid by the 6-7000 crowd (well, the men anyway- ladies were admitted free)  who watched that seasons' Staffordshire Cup Final between Walsall Swifts and Aston Villa...
Four years later Jimmy Forrest (on £1 a week at Blackburn Rovers) became England's first professional internationalist.
It was in July 1885 that strictly marshaled professionalism was legalised by the Football Association.
The sub committee engaged to address the professional question stated:
no player can be termed an amateur who receives any remuneration or consideration above his necessary hotel or travelling expenses.
and that no professional should be allowed to serve on any Association Committees, or to represent his own or any other club at meetings of the Football Association,
Alcock was the secretary of the Football Association at the time.