I have read a great number of speculative accounts regarding the introduction of the whistle (logically for use by umpires rather than the referee). The common denominators tend to be the involvement of Nottingham Forest and one of the Sheffield clubs. A date of 1878 is often featured.
The following item from the Sheffield Daily Telegraph of 19th March 1872 should lay some of this speculation to rest: 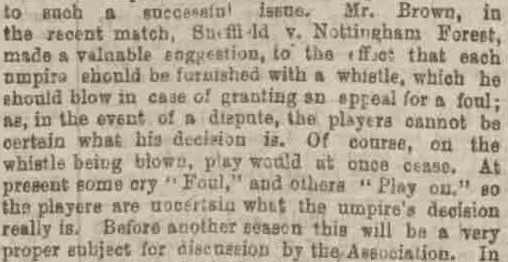 The snippet of information is rather tantalizing. The article refers to a meeting of The Sheffield Football Clubs Association. It's unclear who Mr Brown was? There was a Mr Brown on the committee of the Heeley club, but that's rather tenuous.
In January 1872 Sheffield Norfolk played Forest, winning 5-1. I can find no record of the officials.
The return match on 09.03.72 at Nottingham saw Forest win 1-0. Messrs Pashley and Hussey were the umpires.

Incidentally, the pea whistle came into being in 1884, the legendary Acme Thunderer, so prior to this umpires would have used 'Police' type whistles. 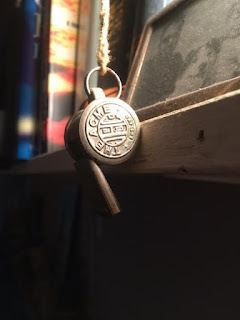 Here is my grandfather's Acme whistle, which would have seen service in the Swansea area in the 1930s.