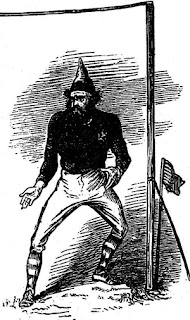 Illustrations of Association matches in the 1870s are hard to find, so apologies for relying on these overused images of  England v Scotland matches. Look at the goalposts. Rather flimsy looking constructions held in place by pegs and guy ropes. The tape, rather than a crossbar, was used until 1882. These posts don't look like they would withstand a blow from a rain sodden leather ball or a falling player.
An incident from the 1876 FA Cup Final illustrates this point.
The first match, played at The Oval, ended in a 1-1 draw between The Wanderers and Old Etonians.
The Old Etonians' equalizer, scored in the 50th minute, was awarded when the ball was kicked through the area where the goals had been.
Contemporary reports give us the detail:

The corner kick by A C Thompson produced a bad scrimmage right in front of the Wanderers goal, and though in the melee the posts were overturned altogether the ball was rushed through the space marked and the umpires very properly awarded a goal to the Etonians.
Sheffield Daily Telegraph 13.03.76

...after a furious scrimmage in which the posts were torn to the ground a goal was achieved by the Eton forwards.
Sheffield Independent 13.03.76

... a general attack was made upon the Wanderers goal, which fell in more senses than one, as owing to the wind and its defenders being forced back upon the posts, they were knocked down, and ball Wanderers and Etonians in a body went through the space between them which the tape should have covered.

I am not sure where the modern convention of identifying Alexander Bonsor as the scorer arose, as no contemporary publications credit him with the goal.