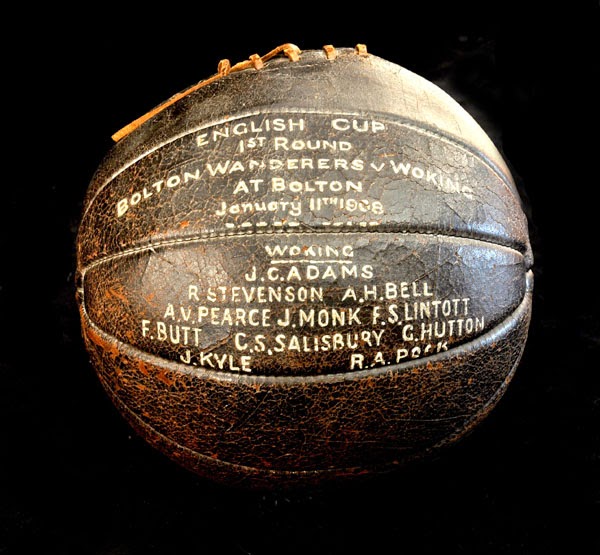 This ball was used in a first round FA Cup tie between Bolton Wanderers and Woking .
The Cards were formed in 1889 and joined the West Surrey League in 1895. In the early part of the 20th century the club was beset by financial difficulties. In 1907-08 Woking progressed to the first round of the FA Cup having overcome Maidstone United and Oxford City in the qualifying rounds.
In the first round proper Woking were drawn away to Bolton Wanderers. Bolton were 13th in the First Division at the time (they finished 19th and were relegated). Woking were no match for their hosts.


The 5-0 defeat proved to be a lifeline for Woking, whose pluck  impressed Bolton. The following season Bolton visited the Surrey club to play a benefit match that secured their solvency.
The match was played on Monday, 26th  April 1909, attracting a crowd of 2000.
Bolton were 1-0 after 1 minute and 3 up at half time. They eased off in the second half  (Woods, Hughes (2) and Marsh were the Bolton scorers). Jack Kyle scored a consolation goal for Woking in the 90th minute.