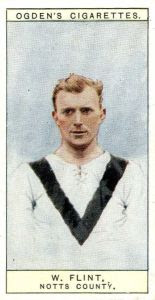 In The Cambridge Companion to Football (2013) Peter Stead refers to D.H Lawrence as the only great modern British novelist from a working class background .

In his 1913 story Strike Pay, Lawrence describes a group of striking miners walking to Nottingham to watch Notts County play Aston Villa on a Wednesday afternoon.

It was a good match between Notts and Villa — no goals at half-time, two-none for Notts at the finish. The colliers were hugely delighted, especially as Flint, the forward for Notts, who was an Underwood man well known to the four comrades, did some handsome work, putting the two goals through.

Notts played Villa in a rearranged League match on Wednesday March 13th, 1912.
Billy Flint was indeed from Underwood. He was a versatile player who represented County 408 times (1908-26).
Whereas Lawrence has Flint as the scorer of both goals, former Villa player Billy Matthews was the scorer of the second. Notts went from 15th to 14th in Division 1 as a result of this win, Villa were 6th.
The return match 3 days later saw Villa win 5-1.

You can read the story Strike Pay here...