Having won the League Championship for the first time in the 1907-08 season, Manchester United, under the leadership of Ernest Mangnall, embarked on their first overseas tour.

I can only find a full team listing for the game with WAC-Moger, Stacey, Burgess, Duckworth , Thompson, Downie, Meredith, Bannister,Turnbull, Picken, Wall- a strong United XI.
As Mr Mangnall commented on his return to England that United would never play Slavia again I can only assume that there was some controversy attached to the games in Prague- the English press reports contain nothing that enlightens us on this matter.
In Vienna, the press commented, the referee ran along the touchline 'in a tremendous state of excitement...some of the attitudes he struck were simply magnificent'. The United players in this match were also surprised by the presence of some Oldham Athletic supporters- expats living in Vienna who attended despite the 1s 8d admission price.
The game that attracted the most attention was the clash with Ferencváros.  The game ended with United being escorted from the ground by armed mounted police having being pelted with stones by the spectators (there were 16,000 present). Thompson received a superficial injury.
Refereeing was the issue, as was often the case with overseas games in this era. The rules on the continent tended to be interpreted differently- physical contact, a staple of the English game, was frowned upon.
Firstly it would appear that there were 'goal judges' deployed at the posts who actually interfered with the play in some way.
There was controversy over a penalty awarded to United-  a United forward 'cleverly rolled into the penalty area' after being fouled, According to Hungarian sources the referee was aware of the deceit but was placed under pressure by the Manchester United players. Goalkeeper Moger scored the penalty to complete the 7-0 scoreline.
There is also some suggestion that the referee wished to dismiss 3 United players for overly physical play. Ferencváros lost 2 players to injury. Communication broke down and when one of the United men (Thompson) placed a hand on the referees shoulder the crowd became incensed.
Some reports held that there were no hard feelings after the game and that the 2 sides dined together, a suggestion dismissed by Mr Mangnall. 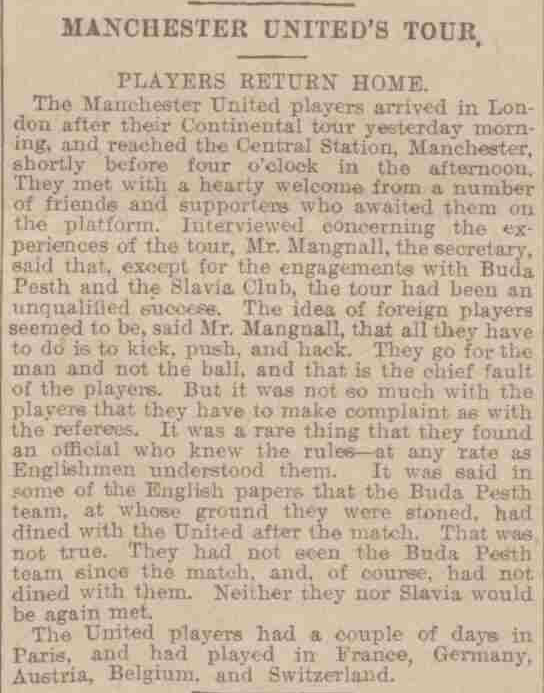 Incidentally, in the Ferencváros game 2 of the great players of the era shared a pitch for the only time. Billy Meredith and Imre Schlosser made 116 international appearances between them in careers that totalled 48 years.