The matches that shaped Association football- The 1870s

A number of matches during this decade left an indelible mark on the development of the game, as competitive cup football and international fixtures came into being. There were also developments and consolidations regarding the Laws of The Game that gave football a look that would be more familiar to a present day eye.

Scotland v England - 1872
After CW Alcock's attempt to organize international fixtures in 1870-71 the first truly representative international fixture took place on 30.11.72. If we follow FIFA's definitions this match shouldn't really count as a full international, as there was no Scottish FA, but that's pedantic nit picking. Queen's Park club served as a national association for Scotland until the inception of the Scottish FA in 1873,
It is a misconception that the Scottish team was Queen's Park in disguise- true, all 11 players were members of Queen's Park but there were 2 London based players included and dual or multiple club membership was commonplace. The England selection was geographically more diverse than one might expect (although JC Clegg's recollections suggest that there was a degree of north south divide in evidence). It was a case English muscle and hard work vs Scots guile and combination. 0-0.

The FA Cup 1871-72
Alcock's masterstroke- a knock out tournament based on the house matches of Harrow school. This signalled the arrival of competitive Association football and was a catalyst in the broader development of the game.
The first round of matches was played on November 11th 1871:

Sheffield v Glasgow - 1876
This was the in the third in the Sheffield vs Glasgow series of matches. The significance is that I believe it is the match that led to Clydesdale's JJ Lang becoming the first Scottish footballer to move to England in order to make his living from the game.
The following is taken from everybody's favourite soccer history blog:

Sheffield 0 Glasgow 2
Bramall Lane 19.02.76
Again Sheffield Rules were played .
The press quoted odds of 5-4 on for Glasgow before the game.
6000 were  at Bramall Lane in wet conditions. The Telegraph comments on the lithe and wiry physique of the Scots and on their showing fine concerted play in contrast to the individualistic approach of Sheffield. There is reference to the bar (instead of the tape), and ends were changed at 45 minutes rather than after a goal. Andrews opened the scoring in the 20th minute.
Glasgow's second goal came when goalkeeper Carr tried to make a quick throw out but hit Andrews on the legs, the ball rebounding into the goal.
The usually partisan Sheffield press admitted that their team was outplayed both 'in speed and tactics'.


London v Sheffield 1877
Up until this point Sheffield rules had existed alongside Association- similar but not the same- and were the favoured rules in South Yorkshire and the Midlands. In 1877 the last of the differences between the codes were resolved.
On 17.11.77 the 18th fixture between London and Sheffield (if we include the 1866 match) was the first played under the unified rules. The London side, led by Arthur Kinnaird, outclassed Sheffield and won 6-0. 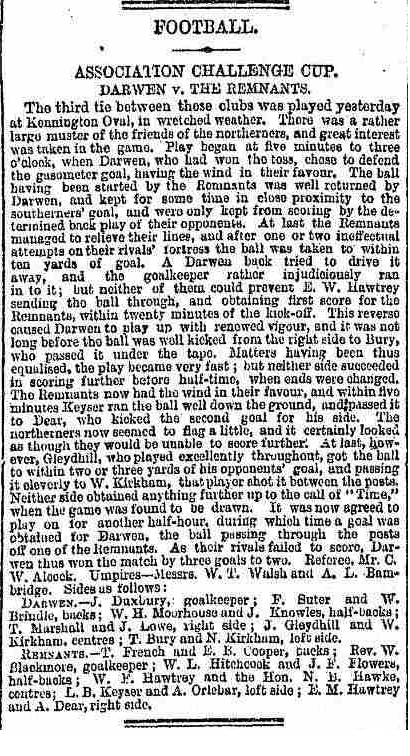 Not quite a team of mill workers - (Darwen had 2 Scottish professionals and a doctor in the side!), but this match represents the first real challenge to the old order in English football. Football in Lancashire was taking off- professionalism was on the rise and cup football had begun to grip the enthusiasm of the proletariat.
For the full story see Keith Dewhurst's Underdogs - essential reading for anyone interested in 19th century Association football.