In the early part of the 20th century the footballing public in what was then the Austo-Hungarian Monarchy held British football in reverential regard.
Willy Meisl wrote of the influence of the touring teams of the 1900s , tours which  his visionary brother Hugo was instrumental in arranging.
Any British team would be enthusiastically greeted, and many ex pros from the British Isles secured coaching positions in central Europe.

The events of the summer of 1929 showed to what extent that idealised view had soured.
Newcastle United had finished 10th in Division 1, Huddersfield Town 16th.
As reported in the Yorkshire Post and Leeds Intelligencer (03.06.29) Huddersfield Town returned from their tour complaining of bad refereeing and hard grounds. The argument was that it was impossible to play with any style against the kick and rush tactics that the continental teams had employed. A club spokesman complained that having lost the opening game of the tour Town were asked to accept reduced fees for the subsequent games (they refused). 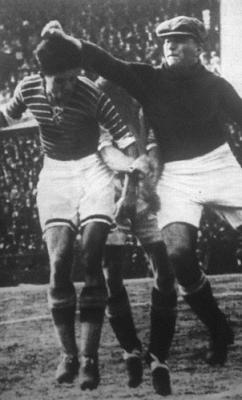 Turner (Huddersfield Town) punches in the match with Ferencváros

Whereas Huddersfield Town returned to England with something of a sour taste in their mouths, Newcastle United found themselves embroiled in an international controversy which the Football Association took 4 months to resolve.
In terms of results the tour got off to a positive start- a 1-0 win over Ambrosiana in Milan. It was, however, an inauspicious curtain raiser. Newcastle complained that the ball was much smaller than the standard size and there was some refereeing controversy -Tommy Lang was dismissed after being bitten by an opponent. The players were harassed by a stone throwing crowd as they left the pitch, and these assaults continued on the team bus and even at the airport.
Following a defeat against WAC the Neues Weiner Journal wrote: 10,000 people were deceived of their money. We need no more games with English teams. That is the net result of the game with Newcastle and of most displays given by English teams in Vienna since the war.
In Bratislava Newcastle suffered the indignity of an 8-1 thrashing at the hands of a Slovakian select team, but it was in Budapest that things really got bad. Newcastle faced MTK (reported elsewhere as being a Hungary Select XI). Following the game, which United, reduced to 9 men, were beaten 4-1, the Hungarian press levelled a number of allegations at the tourists. The Newcastle players, they wrote, didn't exert themselves, and adopted rough tactics. It was even claimed that some of the players were drunk during the match. The Hungarian FA withheld Newcastle's share of the gate money (£165) - they sent it to the Football Association, requesting an investigation into the conduct of the Newcastle players The club strenuously denied the allegations. They countered that the refereeing had been extraordinarily bad- at Budapest the referee had operated from the touchline, a fact that did not prevent him from playing a goal-making pass to a Hungarian forward!
Newcastle also put the matter into the hands of the Football Association.  Meanwhile, according to The Yorkshire Evening Post (04.06.29) the Hungarian press were circulating reports calculated to undermine British prestige. These included the opinion that English players on tour:...travel about pompously, earn  high rewards for their play,and behave as if they were missionaries  from the home of football culture who were condescending to honour inferior Colonials with their visit.
The controversy became an issue of discussion by the Hungarian FA and the Football Association. A representative of the Hungarian governing body attended an enquiry held in October 1929.
The FA concluded that the Hungarians had been justified in trying to cancel the contract on the basis of substandard performances by United,  but that the match having being played, they could not withhold the money.The FA were also satisfied that the refereeing had been substandard. 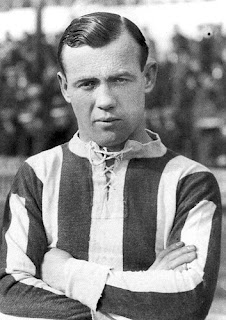 The FA did not comment on the dismissal of Gallacher and Maitland . The referee, Gabriel Boronkay, wrote in his report to the Hungarian FA:

In the 26th minute of the second half-time, I was compelled to send off the field the English (sic) player named Maitland, on account of his having boxed his adversary (Hirzer). In the 28th minute I had to give marching orders to the English (sic) player Gallacher because of his rough foul against Borsanyi. I beg to remark that in this moment I was standing quite close to the player and I am convinced that he was tipsy, and as I heard, he drunk much cognac between the two half-times.

Hugh Gallacher offered this explanation:
It was a boiling hot day so we rinsed our mouths out with a drop of scotch and water.