In 1911 December Ferencváros embarked on a tour that took them to Germany and England. The Budapest press was cynical about the tour, fearing that Ferencváros' reputation (and therefore the reputation of Hungarian football as a whole) would not be enhanced.
5 of the party, including Imre Schlosser, joined in Munich, where they had been representing Hungary in a 4-1 win over Germany.
After 4 high scoring victories in Germany the Hungarians sailed to England where they were greeted by representatives of the FA and Vivian Woodward. the high point was considered a win over Woking in England.
Woking had joined the Isthmian League that season (placing them among leading southern Amateurs such as West Norwood, Nunhead, Dulwich Hamlet and London Caledonians). Ferencváros took a 2-0 lead in heavy conditions, which were remarked to hamper the visitors' passing style. The game was ended prematurely due to theses adverse conditions.

Ferencváros lost their final match 4-1 against English Wanderers (a strong amateur selection featuring Olympians such as Berry, Hoare and Woodard) . The tourists were also guests at an amateur international in which England beat Wales 10-0.

Incidentally, the attendances for the 2 fixtures in England were not great- 800 at Woking and only 1000 at Stamford Bridge. 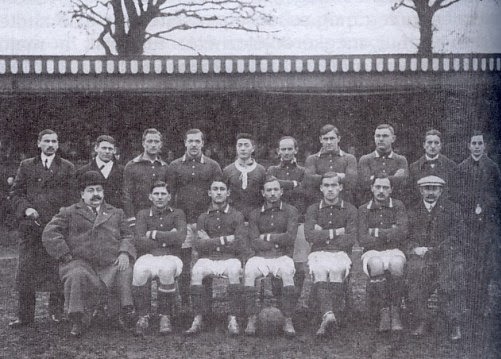 News of Ferencváros' successes had been warmly received in Budapest, and the team returned home to a triumphal reception.