Prior to the Federation of Australia in 1901 there were six separate colonies (Queensland, New South Wales, Victoria,Tasmania, South Australia, and Western Australia).
Victoria had it's own local code of football rules (Victoria Rules now known as Australian Rules) codified in 1859, thus predating the Association Football (1863) , Rugby Union (1871), American 'football' (1873) and Gaelic Football (1887).
Association football was played in Tasmania, New South Wales, Victoria and Queensland from the late 1870s and early 1880s.
The first Inter Colonial matches were played in 1883. Here is an account of the first match. Note the explanation of the mode of play and the low attendance.

FOOTBALL.
VICTORIA V. NEW SOUTH WALES.
An intercolonial football match under the British Association rules, between teams representing Victoria and New South Wales,was played yesterday on the East Melbourne cricket-ground. This game has only quiterecently been introduced here, the chief merit claimed for it by the promoters beingthat there is less rough play than under the Victorian rules, and that its general adoption would afford the opportunity for international matches with British teams. The main principle of the game is that with the exception of the goalkeeper on either side, no player is permitted to handle either the ball or his opponents, although he maybutt the ball in an inelegant way with his head. The drop-kicking and marking, together with the skilful system of exchanging little marks that have so popularised the Victorian game, are entirely wanting.If the game is apparently less rough to an observer, the element of danger is not wanting, and when a number of players come  together, all kicking at the ball, some nasty bruises are received. A spiteful player has also a chance of seriously injuring an opponent without his motives being suspected - a thing that could scarcely happen under the Victorian rules. The Victorian eleven - who appeared in light blue uniforms,while their opponents wore dark blue colours -were captained by Kier, Eaves leading the New South Wales team. The former won the toss, and kicked down the ground, having a strong wind blowing in their favour. For the first 20 minutes the Victorians kept the ball around their opponents' goal posts, but could not manage to score. The Sydney men then took it forward, and after some good play on the part of Richardson and Kerr, the latter put the ball through with his head.During this part of the game the kicking was rather wild, and one of the incidents of the  play was a combatant kicking at the ball, and striking a spectator outside the rink. The most interesting part of the game was the skill shown by the players in dribbling the ball; this, indeed, being the only attractive point in the display. In the second half the Sydney men again started well, and Eaves kicked a second goal for them; but after this  Victoria prevailed, and through the good play of Ware and Almond two goals were secured for that side in quick succession by Riddell and Teare. The Victorian players had several other good chances of scoring, but they were not accepted, and the game ended in a draw, each side scoring two goals. Mr. W. Bisike acted as referee, and Messrs. Niven and Schuler us umpires. About 200 people witnessed the match. 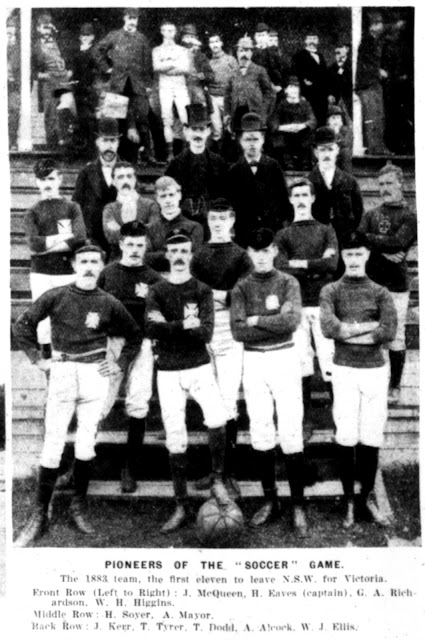 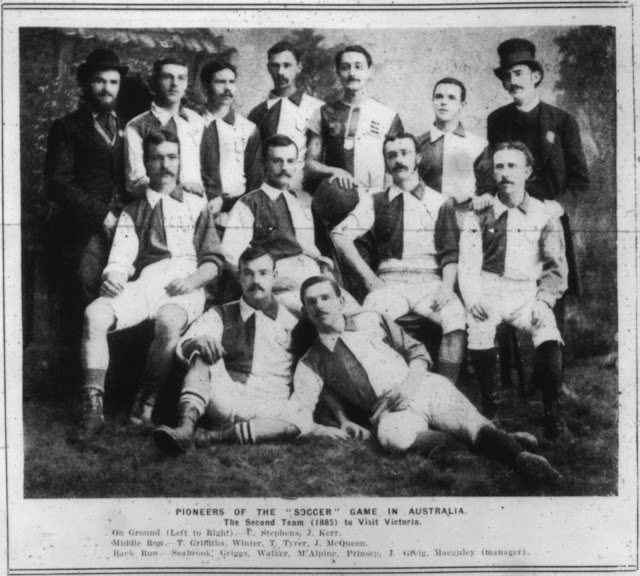 The following  Inter Colonial matches were played in the 19th Century: