From the earliest times, football in England featured players who were born overseas. This was due to the social status of the young men playing the game and the fact that the United Kingdom was at the centre of such a vast empire.
William Parry Crake of the Wanderers (1872 Cup final) was born in India , as were Henry Renny-Tailyour and Alfred Goodwyn of The Royal Engineers.
Another early example was Arthur  Savage of Crystal Palace, who played in goal in the 5th international against Scotland on 4th March 1876 and was born in Sydney, Australia.
As football entered the professional age the officer classes were less prominent, and the leading players were increasingly drawn from the English and Scots working classes. Because English and Scottish football was stratospherically superior to that of other nations at the time the notion of foreign players coming to play in the UK was unimaginable. 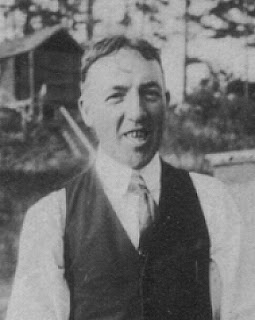 It would appear that the first non- British/ Irish player to play professionally in England was Walter Bowman. Bowman  played for Accrington and later Ardwick/ Manchester City  in the Football League, making his debut  in 1892. He began as a forward but later played at centre half.


Bowman was from Ontario and  first came to  the UK in 1888 with the Canadian touring team. He had earlier played in a representative 'Canada v USA' match. In 1891 Bowman returned as a member of a joint Ontario/ New Jersey squad. On a 4 month tour the visitors played 58 fixtures. Bowman played in no less than 54 of those matches, scoring 11 goals.