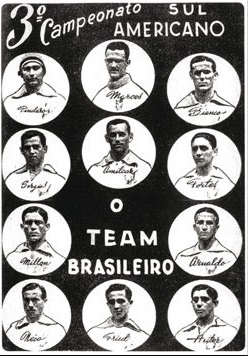 The Brazil team that won the 1919 South American Championship. Left to right from the top line:

Píndaro
Píndaro de Carvalho Rodrigues (26-Flamengo) Full back Pindaro was one of the players who split from Fluminense to found Flamengo. He sported some fantastic headgear during his career, and later coached Brazil at the 1930 World Cup.

Marcos
Marcos Carneiro de Mendonça (24-Fluminense) Marcos became a goalkeeper as a youth because he had lung problems. He was a real hero of the 1919 championship, particularly for keeping a clean sheet in the deciding match with Uruguay which lasted 150 minutes.

Amílcar
Amílcar Barbuy (26-Corinthians)
A player who was for many years considered the most skillful to come out of Brazil.

Fortes
Agostinho Fortes Filho (17-Fluminense)
Young Fortes, a versatile half back, made his international debut in the second game of the tournament.

Arnaldo
Arnaldo Patusca da Silveira (24-Santos)
Arnaldo was captain of the team. He made a total of 16 appearances for the Seleção.

Neco
Manoel Nunes (24-Corinthians)
Described as the first idol of Corinthians- Neco joined the club as a youth, and aside from one season at Macenzie his association with the club as player and manager lasted 25 years. He played 15 times for Brazil, scoring 8 goals. He was top scorer in the 1919 South American championship with 4 goals. Neco was a carpenter and he was sacked for taking time off work to play in the 1919 tournament.

Fried
Arthur Friedenreich (27-CA Paulistano)
The player of the tournament and scorer of the winning goal in the play off. Fried became a national hero and Brazil's first football superstar. The boot with which he scored the winning goal in the final against Uruguay was paraded around the city on a pole with a banner proclaiming The glorious foot of Friedenreich. The boot was later displayed  in jewellers' shop windows across Rio. 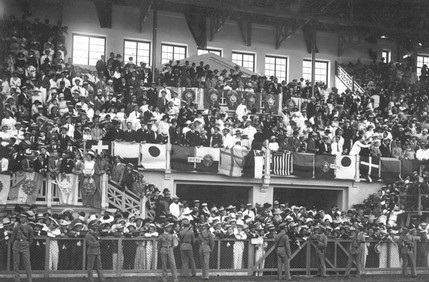 A crowd scene from the first Brazil v Uruguay match 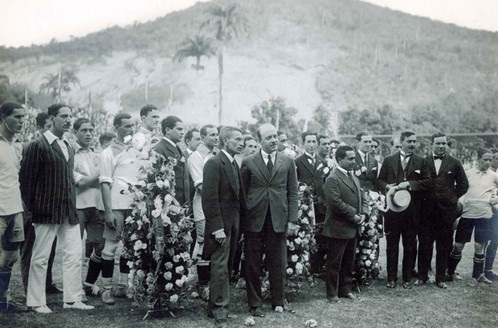 Brazil after the victory over Uruguay in the second match