In 1910 a Bohemian representative side drawn from 4 clubs visited St Petersburg, Moscow and then London.  This was during a period when Bohemia (or the Czechs) were without representation in the international arena. Of the tourists Richard Veselý had represented Bohemia whilst they were recognized by FIFA (1906-08).  Inspired, no doubt, by the visits of Corinthian FC to Prague during the 1900s the team styled themselves Corinthians. When they played in London, the tourists were billed as Bohemia
The squad was as follows- some of the players first names are not recorded.

Ladislav Medek is reported to have scored 14 goals in the opening match.

The Moscow team that inflicted a 1-0 defeat on the tourists was made up of 9 Britons and 2 Russians. The Russian press at the time referred to the match as an 'international'. The game attracted 3,000 spectators, and was played on a hard, frozen pitch.  Medek dislocated his shoulder.  Newman headed the Moscow goal in the 70th minute. 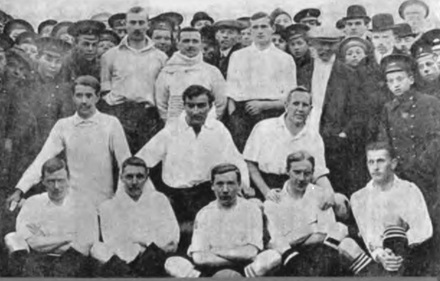 Whilst hailing the win as a triumph for football in Russia, contemporary reports  conceded that result flattered the victors, and that the Czechs had been over confident in their approach to the game.