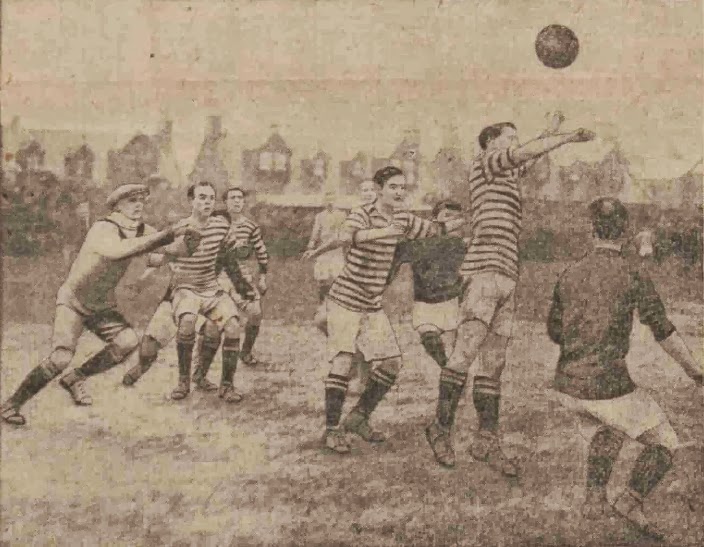 Most of the changes in the Laws of The Game in the 1860s and 70s concerned what happened when the ball went out of play.
Here we will look at Law 7:

Notice that the ball 'going behind the goal line' wasn't out of play as such: there was still the matter of getting the touch on it.  For the attacking team getting the touch down meant a shot at goal from 15 yards (Some similarities to Rugby here - in early Rugby rules the 'touchdown' or 'try' counted for nothing, but depended on the 'conversion' to a 'goal') . I can only assume that the 11 defenders would line up between the goalposts and just behind the goal line. As the attacking players all had to be behind the ball when it was kicked and that the ball had to be shot directly at goal I imagine that very few goals would have resulted from this process,

1866
Following the February 1866 AGM  the FA adopted the Sheffield principle of using secondary scoring to decide matches finishing equal on actual goals:
...if a player of the opposite side first touches the ball after it has gone behind the goal line of his adversary, one 'touch down' shall be scored by his side, and in the event of no goal being got by either side, or an equal number of goals being got on each side, the side obtaining the greater number of 'touches down' shall be the winners of the match.

It was a relatively short lived experiment, the touch down disappearing from the rules altogether following the 1867 AGM, being replaced by a free kick for the defending team to be taken within 6 yards of their goal.


Sheffield, 1868
The corner kick first made an appearance in the revised Sheffield rules of 1868. Having dispensed with rouges (touch downs) Sheffield introduced the following:
When the ball is kicked over the bar of the goal it must be kicked off by the side behind whose goal it went, within 6 yards from the limit of their goal...
when the ball is kicked behind the goal line a player of the opposite side to that which kicked it out shall kick it in from the nearest corner flag...

The 1870  FA rules had when the ball is kicked behind the goal line, it must be kicked off by the side behind whose goal it went, within 6 yards from the limit of their goal.
and in 1872 the FA adopted the 1868 Sheffield rule verbatim.

As the corner kick fell under the category 'free kicks' it was not permissible to score a goal directly from a corner kick.