When William McGregor founded the Football League there was conjecture who was included and who was excluded. McGregor wanted regular guaranteed fixtures that were financially viable, thus ensuring a steady income allowing the member clubs to sustain professionalism. It was the nature of this exclusivity that led to the condition that only 'one club per town' would be admitted.

McGregor's initial letter stated:
I am only writing to the following – Blackburn Rovers, Bolton Wanderers, Preston North End, West Bromwich Albion, and Aston Villa, and would like to hear what other clubs you would suggest.

Preston were considered the strongest team in the country and McGregor and his associates courted them patiently. Blackburn Rovers were also a dominant force, winning the FA Cup 3 times in succession in the mid 80s.
The other clubs could all be said to have local rivals with an equal if not more credible claim to being included in the elite 12 of British football. (The Football League was never the English league- McGregor hoped that Scottish clubs would be attracted by the venture  cross border friendlies were a proven crowd puller).  Bootle could have been perceived as more deserving of a place than Everton, but Everton were chosen for their commercial potential. Halliwell were strong rivals to Bolton Wanderers and both St George's (then known as Mitchell St George's) and Small Heath were local rivals of McGregor's own Aston Villa club.
One club official was so disgruntled at missing out on the financial security that league football seemed to promise that he set about establishing what has been seen as an alternative to the Football League.
JG Hall of Crewe Alexandra recruited 20 teams and formed not a league as such, but a fixture circle, at least guaranteeing members some regular engagements that would be honoured. The 12 clubs joining the League, of course, would not be readily available for lucrative friendlies in the face of their new commitments.
The Combination, as the new body was known, failed for a number of reasons. Firstly it was too large to operate as a proper league. There just weren't enough Saturdays between September and April (hence the 16 game rule) It lacked a central organising structure, and placed responsibility for arranging fixtures on individual clubs. This led to  a lack of clarity over the status of fixtures and also to fixtures being unfulfilled.  Also a  number of member clubs were already in a precarious financial position.  The Combination was wound up in April 1889.
The most comprehensive reference to Combination fixtures that I have found has been with reference to Newton Heath's season.

Blackburn Olympic (Lancashire)
The only team in the Combination to have won the FA Cup, Olympic were now being overshadowed by Blackburn Rovers and went out of business in September 1889. 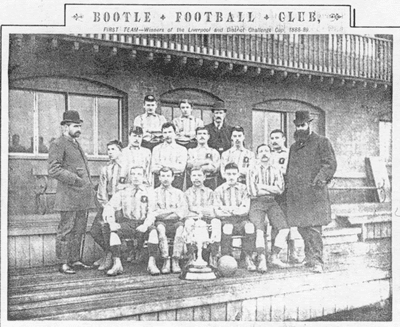 Bootle
Bootle (Lancashire Merseyside)
The strongest side in Merseyside in the early 1880s. They were shunned in favour of Everton when the Football League was formed. Having applied unsuccessfully in 1889 and 1890  Bootle joined the Football League in 1892 but resigned after one season and were replaced by... Liverpool.

Crewe Alexandra (Cheshire)
Formed in 1877 and currently playing in the 3rd tier of the English pyramid. FA Cup semi finalists in 1888. Played in the Football Alliance until they became founding members of the Second Division in 1892. Lost their league status in 1896, returning in 1921.

Darwen (Lancashire)
The best side in Lancashire until the rise of neighbours Blackburn Rovers and Preston North End. Darwen pionered the use of Scottish professionals. Played in the Football league from 1891-1899 then survived until 2009 in the Lancashire Combination.


Derby Junction (Derby, East Midlands)
Founded by Junction Street School former pupils' and renamed Derby Junction in1885. They reached the semi finals of the FA Cup in 1888, beating Blackburn Rovers (who had won the Cup in the previous 3 seasons). Founder members of the Midland League in 1890, Derby Junction dropped out in 1893 and ceased to exist by 1895.

Derby Midland (Derby, East Midlands)
Founded in 1881,  joined the Midland League in 1890 and were absorbed by Derby County in 1891.


Halliwell (Bolton, Lancashire)
In the 1880s Halliwell were serious rivals to Bolton Wanderers, but missing out on League status seems to have signaled their demise. In the 1890-91 season they were on the receiving end of a 12-0 thrashing from The Wednesday in the FA Cup. They joined the Lancashire Combination in 1891 but were expelled for failing to fulfill fixtures.

Leek (Staffordshire, West Midlands)
On their first appearance in the FA Cup in 1884-85 Leek lost  2-3 to Queen's Park . Founder members of Midland League, they joined the second incarnation of The Combination in 1890 and left in 1896. Their most successful season was 1893-94 when they finished 3rd.
(Leek have no connection with the current Leek Town).

Lincoln City (Lincolnshire)
Having being founder members of Division 2 Lincoln  were in and out of the Football League up until its expansion in 1920-21, having faced re election on numerous occasions.
They currently play in the 5th tier of the English pyramid.

Long Eaton Rangers (Derbyshire, East Midlands)
After finishing bottom of the Football Alliance in 1891 Long Eaton joined the Midland League , where they remained until 1899. 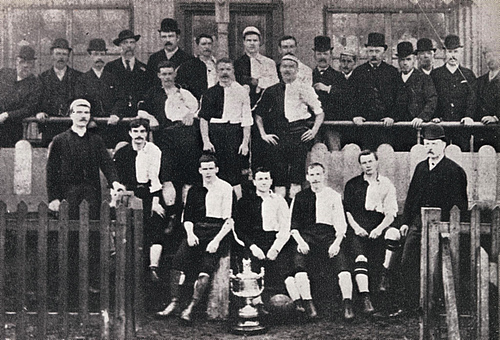 Nottingham Forest (Nottingham, East Midlands)
Forest were a strong club , and their older rivals, Notts County, were on the wane, but the one club per town rule excluded them from joining the chosen 12.

Notts Rangers (Nottingham,  East Midlands)
Formed in 1868. Founder member of Midland League,1889, but expelled in the first season for non- fulfillment of fixtures.

Small Heath (Birmingham, West Midlands)
Small Heath were founder members of Football League Division Two in 1892-93 and in 1905 changed their name to Birmingham, adding the City in in 1943.
South Shore (Lancashire)
Merged with neighbours and rivals Blackpool in 1899.


Witton (Blackburn)
Not connected with the present day Witton Albion. As St Mark's the Blackburn club were founder members of the Lancashire FA. Witton's high point was probably holding Darwen to a draw in the 3rd round of the 1887-88 FA Cup. In 1890-91 they joined the second version of The Combination, but failed to complete the season. The following year they finished 11th out of 12 in the Lancashire League, having conceded an average of 5 goals per game. Thanks to reader Nemo for helping to clear up some confusion over the identity and location of this club.