We need to talk about Rugby Football...
When both codes (Association and Rugby Football) were gaining in popularity with the wider public, Yorkshire was one of the areas in which the handling game prospered (Sheffield had it's own football code).
Bradford, a city in West Yorkshire associated with the textile industry (The Wool Capital of the World)
had a population of over 100,000 in the 1860s.

By the time that the breakaway Northern Union (which recognized the need for professionalism) formed in 1895 Bradford was home to two prominent Rugby clubs.
Bradford FC formed in 1863 and  Manningham Albion in 1876 (becoming plain Manningham in 1880). Manningham was predominantly working class, and was not not so strong as Bradford, either financially or on the pitch.
In 1895 both teams joined the Northern Union. 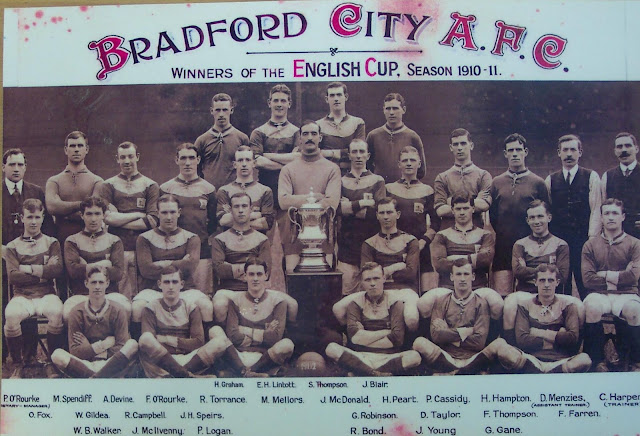 Manningham - Bradford City.
By the turn of the century Manningham were in financial difficulties.  In neighbouring Lancashire Association football was enjoying a boom that had endured since the formation of the Football League in 1889.
Early in  1903, Manningham decided to form a professional association team, to be called Bradford City. They applied for admission to the League, despite the fact that Bradford City had no players and had never played a game. The Football League welcomed this opportunity to establish a team in the Rugby dominated area of West Yorkshire.
A squad was assembled  at a cost of £917 10s and Bradford City entered the league having never played a competitive game.

Bradford FC soldiered on in the Northern Union, although their gates were barely half of that being attracted to league football at Valley Parade.
Bradford FC had ventured into Association with limited success in the 1890s, playing in the West Yorkshire League  FA Amateur Cup in 1896–97, progressing to the FA Cup in 1897–98 and 1898–99.

In 1907 the committee of Bradford FC proposed a merger with Bradford City (one incentive to City would be the use of the bigger Park Avenue stadium). Members of the rugby club were outraged and went so far as to demand not only rejecting the switch to association football but also the abandonment of Northern Union ans a return to amateurism. Club chairman, Arthur Briggs then instigated what became known in rugby circles as The Great Betrayal, going ahead with the proposed merger without the approval of the members. Bradford City, however, feared that the merger would in fact be a take over, and rejected Briggs' offer.
Briggs went ahead and formed his own professional association football club, named Bradford AFC (they were never officially known as Park Avenue). The new club joined the Southern League (the most northerly club ever to be admitted) and the following season, despite modest results, were elected into the Football League.